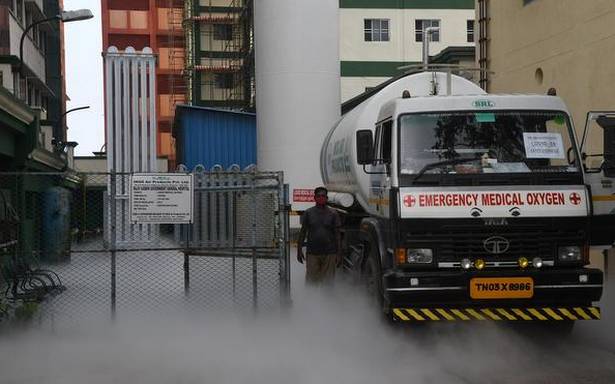 Verdict against the welfare of Tamils, says Thirumavalavan

Speaking to reporters in Villupuram, Mr. Thirumavalavan said State government had also failed to project its actual requirement of medical oxygen before the apex court. All the details the government had furnished to the Centre were not placed before the Supreme Court, he said.

“The Centre on the one hand was claiming that there was no shortage of oxygen as it had sufficient stock. Then why did it come forward for the production of oxygen in the closed Sterlite plant? This must be properly explained to the people,” he said. Mr. Thirumavalavan said the State government had been contending that its requirement was 450 MT of oxygen while the production was 400 MT, resulting in shortage of 50 MT.

The government convened the all-party meeting in a hurried manner only to ensure that the DMK was also made a party to the decision, he charged.

The Supreme Court had also announced that the Centre would constitute a committee to monitor the whole production process. This was disappointing as the committee members would be nominated by the Centre, he said.

“The production of oxygen could have been entrusted to major Public Sector Undertakings including NLC India Ltd. and Bharat Heavy Electricals Limited.

“Further Vedanta had its plants in several parts of the country. But why did the company prefer Tamil Nadu for producing oxygen in a factory that has remained closed. The discrepancies in the approach have exposed the inner motive of the Centre and the State government,” he said.

The Centre was planning to divert the oxygen from the State to the Central pool. The State government had also remained mum without raising its voice, he charged.

So this was going to cause immense hardship to the people and the State, he added. Villupuram MP D. Ravikumar was present at the conference. Meanwhile, at a press meet in Chennai, the VCK leader said the Union government should provide vaccines free for all and urged Prime Minister Narendra Modi to take responsibility for the deaths due to shortage of oxygen, medicines and lack of medical infrastructure.

“Free vaccines should be available to all and Union government should ensure it. The cost of vaccines makes it inaccessible to the poor and selling it at differential price are the reason why more people are not coming forward to vaccinate themselves,” he said. Mr. Thirumavalavan charged that Union government had paved the way for pharma companies to earn ‘massive profits’ by creating an artificial shortage and demanded that steps be taken to ensure vaccines cost the same across India. He said transporting oxygen through cylinders and vehicles was the problem and demanded that Tamil Nadu be prioritised for the oxygen produced in Sterlite copper plant in Thoothukudi.