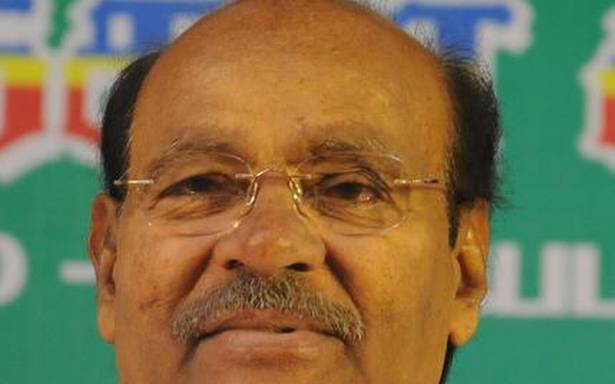 The PMK founder’s statement comes against the backdrop of Deputy CM O. Panneerselvam and other AIADMK leaders saying that 10.5% reservation for Vanniyars within the Most Backward Class quota was only provisional

PMK founder S. Ramadoss on Tuesday reiterated that 10.5% internal reservation provided to Vanniyars within the Most Backward Class quota was permanent and would only be increased after conducting a caste census in Tamil Nadu.

In a statement, Dr. Ramadoss said that it would become clear through the caste census that Vanniyars constitute around 15% of the population in Tamil Nadu and the reservations would be increased accordingly by a new law in the Legislative Assembly.

Dr. Ramadoss’s statement comes against the backdrop of AIADMK coordinator-cum-Deputy Chief Minister O. Panneerselvam and other prominent AIADMK leaders saying that 10.5% reservation for Vanniyars within the Most Backward Class quota was only provisional.

Stating that this was not just a caste issue, but a social justice issue and a developmental issue, the PMK leader said, “The law guaranteeing 10.5% reservation for Vanniyars was passed in the State Assembly and it has been signed by the Governor of Tamil Nadu. The law has also been officially notified.” He said that there is no concept of a temporary law after it has been passed by the Assembly.

“Another law has to be brought in to replace the existing law. This is the procedure,” he said, adding, “The real social justice would be to provide reservations (in education and jobs) proportional to their population. The Chief Minister also said on the floor of the Assembly that 10.5% internal reservation was just a first step and it would be increased after conducting a caste census.”

03/30/2021 India Comments Off on Vanniyar reservations will be increased after caste census, Ramadoss says
India