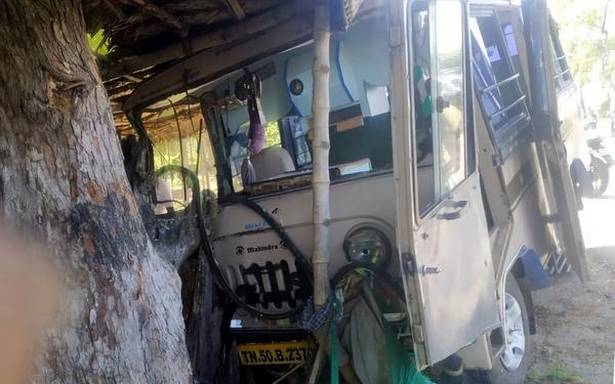 A father and son died in a road accident when a passenger van hit them after tyre burst here on Wednesday.

Police said that about 10 people from Veerapandi were travelling in a van to Bodinayakkanur to attend a family function. As the vehicle was approaching Kodangipatti, it is suspected that a tyre of the van burst.

Following this, the driver is said to have lost control and the van hit a two-wheeler in the opposite direction. In the impact, the rider died on the spot, while the pillion rider, who suffered a fracture on his leg, was rushed to the Theni Government Medical College Hospital. However, he died on the way to the hospital, police said.

The rider was identified as Muthuraj and the pillion his son Praveen. The van driver identified as Surendran and four others suffered multiple injuries. Traffic on the road had to be suspended for a while.

Palanichettipatti police have registered a case.