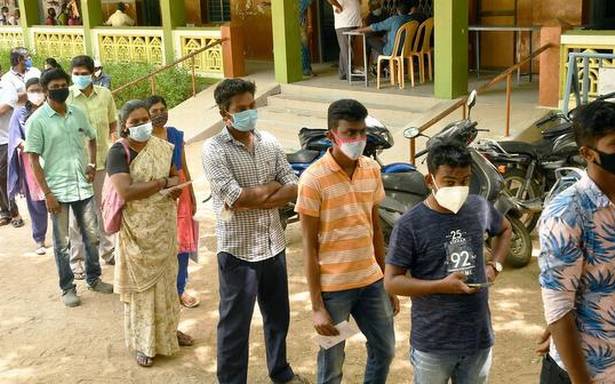 We expect the situation to improve next week, says a senior health official

The short supply of vaccines to the districts continues to disappoint the public, who come to the vaccination centres in large number and return home without getting vaccinated after a long wait.

However, the disappointing supply of vaccine doses from Chennai to the districts has seriously affected the vaccination. The officials here are helpless, they say.

“We’ve made all arrangements for vaccinating the public. But we were getting less number of doses from Chennai that stopped completely at one point. We received a few thousand doses of Covaxin on Thursday while there was no supply of Covishield. We expect the situation to improve during next week,” said a senior official attached to the Department of Public Health.

In Thoothukudi district, where 88 vaccination centres had been created, besides the special vaccination camps in the rural areas, 1,32,213 persons had been vaccinated till Thursday including the second jab administered to 28,822 persons. The district had only 360 doses of Covishield and 820 doses of Covaxin on Thursday morning and the entire Covishield doses got exhausted on Thursday evening itself.

“Since many of the foreign countries have approved only Covishield, most of the youth coming to vaccination centres ask for this vaccine. When we informed them that it was not available, it often led to the visitors confronting us. We’re pacifying them that the situation would improve within a week,” said a health worker posted in one of the vaccination centres in Thoothukudi Town.

Officials are not ready to openly admit that the short supply of vaccines had derailed the ongoing vaccination drive.

“Since the minister says that there was no shortage of vaccines, the people coming to the vaccination centres abuse us verbally. The situation is intolerable as we can understand the people’s anger. Normalcy will return only if we can arrange the vaccines, especially Covishield, in significant number,” said an official attached to the Department of Public Health, Nagercoil.