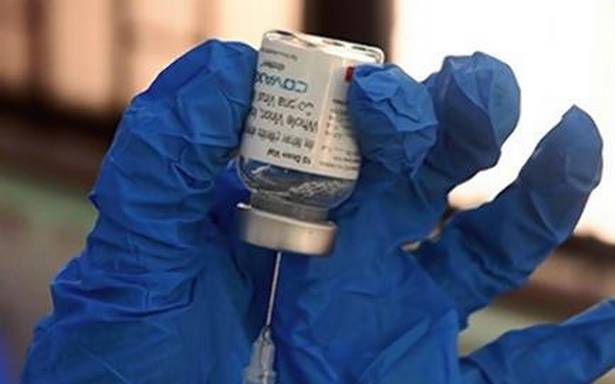 Unions, managements have together launched intensive awareness campaign among workers

Companies in the automobile hub near Chennai are conducting vaccination drives for their employees, following a State government directive amid the second wave of COVID-19. However, there is hesitancy from a section of the workers in taking the vaccines. The State government in its order of May 29 asked the industries (including automobile units) to vaccinate all employees within a month.

“There is hesitancy among workers to take the jab. A lot of misinformation is being spread on Facebook and WhatsApp about the vaccines, which is making some workers sceptical. Both the unions and managements are creating awareness,” G. Vinayagam, president, United Union of Hyundai Employees (UUHE), said.

“We have conducted 10 vaccination camps, in association with the district health authorities (Sriperumbudur health centre officials) and private hospitals. We have covered around 10.73% [1,685 employees of 15,700] of our employees and we will continue this to cover everyone,” Stephen Sudhakar J., senior vice-president & unit head – people strategy and business support, Hyundai Motor India Ltd., said.

“To create confidence in employees, we have started multiple educational programmes through various communication platforms such as mailers, knowledge-sharing sessions with medical experts and general information sharing for awareness to reach out to everyone to remove any ambiguity and stress on the importance of vaccination,” he added.

Employees of various automobile industries expressed their reservations about taking the vaccine when they spoke to The Hindu.

“We read through social media that people died after taking the vaccine. I also heard several people have fallen sick and got infected after taking the first dose. My family is reluctant in allowing me to take the shot,” said an employee who wished anonymity.

Another employee said, “I have not fallen sick for the last seven years and I personally feel that I have good immunity. I’m worried that taking the jab might not go well with my body and might have some complications.”

“Ford has started organising vaccination campaigns. There is reluctance shown by workers. Now, only Covishield is available. Some of them are comfortable taking Covaxin and waiting for it to be made available,” Selvaraj, an employee and former president of the Chennai Ford Employees Union, said.

S. Kannan, deputy general secretary, Centre of Indian Trade Unions (CITU), Tamil Nadu, said the companies should give two days paid leave after employees take the jab. “A car company which has a presence in another country gives two days leave to workers after vaccination. But the same company refuses to grant leave in its factory near Chennai. The State government should look into this,” he added without naming the company.

To queries from The Hindu, commercial vehicle maker Daimler India said it was providing full reimbursement for employees and their dependent family members to be vaccinated across India. Over 90% of employees in the above 45 years age category and 25% in the over 18 years age category were inoculated, it said.

The company has been conducting an awareness programme on vaccination and had opened a vaccination centre at its manufacturing plant in Oragadam, which can process up to 250 people a day. Daimler said it had extended the programme to its business partners, other companies in the belt as well as the local community and also plans to offer it free of charge to truck drivers.

“We have an employee base of nearly 1,750 people, and most of them are in their late 20s or early 30s. We have managed to vaccinate nearly 45% of our employee base, and a similar number of our outsourced workforce,” Satish Sharma, president, Asia Pacific, Middle East & Africa, Apollo Tyres Ltd., said.

“Senior leadership team took the vaccine themselves to build the employee’s confidence that vaccines are safe. Our trade union was supportive as the leaders themselves got vaccinated on the first day and encouraged others for the same,” he added.

TVS Motor Company and its group companies will vaccinate around 35,000 direct and indirect company employees across India. “We have vaccinated more than 50% of the employees through various vaccination drives at all our plants and offices across the country in collaboration with various hospitals (Manipal, Apollo, MGM Hospital etc.) and various primary health centres (PHCs),” R. Ananda Krishnan, executive vice-president, human resources and information technology, TVS Motor Company, said.

The company will cover the cost of the COVID-19 vaccination for all employees and their immediate family members, he added.

Tamil Nadu accounts for 35% of India’s auto components production and there are more than 1,300 factories in the State for producing motor vehicles, trailers and semi-trailers.