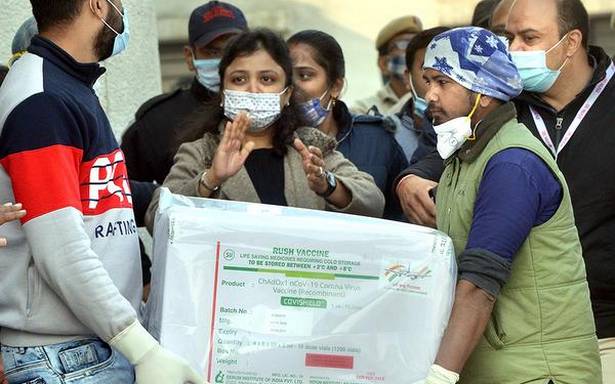 Police will also escort vaccine from hospital to 89 immunisation centres across city; three-layer security at the central cold storage facility

A SpiceJet flight carrying the vials landed at the Delhi airport around 10 a.m. on Tuesday, four days ahead of the vaccination drive on January 16.

Special Commissioner of Police (Operations and Licensing) Muktesh Chander said they ensured smooth passage of the vaccine from the airport to the hospital, where adequate police arrangements have been made.

A Delhi government official confirmed the development, adding: “Delhi received 22 boxes of the vaccine, each containing 1,200 vials. Each vial has 10 doses.” The Delhi government, however, did not officially share any information on the development. As of Tuesday evening, the vials had not been moved to the 89 hospitals where inoculation will begin on Saturday.

The police will ensure smooth transportation of the vaccine to designated sites when the immunisation drive begins. “It will be escorted smoothly and necessary security arrangements will be done at the 89 vaccination centres in Delhi,” Dr. Chander added.

Officials said three layers of security: CCTV cameras, Delhi Police personnel and the hospital’s own security staff are in place around the storage facility at RGSSH. Deputy Commissioner of Police (Shahadra) Amit Sharma said, “We have deployed the personnel at the storage area of RGSSH.”

From the hospital, the vaccine will be transported to immunisation centres in special vehicles under heavy security.

The police control room has been directed to respond promptly to calls from cold storage points, vaccination sites, and immediately pass on the information to PCR vans, local police, traffic police and any other agency.

The vaccine came on a day when the national capital reported 386 new COVID-19 cases in the last 24 hours, taking the total to 6,30,892, according to a health bulletin released by the Delhi government on Tuesday.