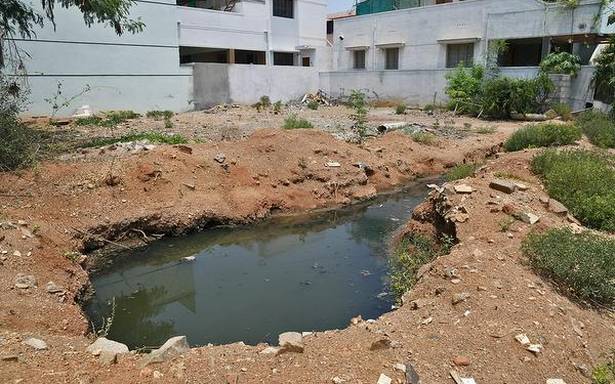 In the absence of drainage channels, residents release sewage into plots adjacent to their houses

Sewage flowing on the streets and stagnating on vacant plots are common sights in many of the residential areas that come under Lakkapuram Panchayat in Modakurichi Taluk.

However, in the absence of drainage channels residents release sewage on the streets, and into vacant plots adjacent to their houses. A few residents have dug pits to discharge sewage. “Discharging sewage on streets inconveniences other road users, but we have no other option”, says V. Krishnan of Nagaratchi Nagar.

Sewage that stagnates on the streets and in pits turn into a breeding place for mosquitoes. Though residents are aware of the health hazards, many said that despite representations to the local body officials, no steps were taken to construct drainage channels.

“The entire locality lacks drainage facility and officials are least bothered”, Karpagam, resident of Nagaratchi Nagar, says. Discharging sewage on streets leads to many problems, including dispute with neighbours and road users, many a times, she adds.

Road users said that in many areas, residents damage tar-topped roads to allow sewage flow to the other side of the road. Despite causing inconvenience to motorists, it is a major sanitation issue, says T. Vignesh, a motorist from Sanarmedu.

Residents said that in the absence of elected representatives, their grievances remain unaddressed. They want the local body to construct drainage channels to ensure sanitation in these areas.