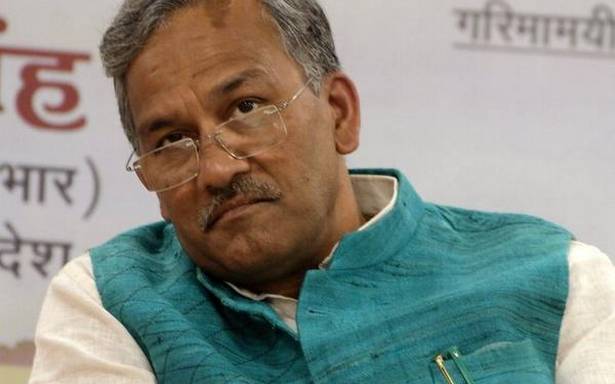 Uttarakhand BJP president Bansidhar Bhagat had referred to Ms. Hridayesh, who is Leader of Opposition in the State Assembly, as “arre budiya,” derogatorily calling her an “old woman”.

Uttarakhand Chief Minister Trivendra Singh Rawat has apologised to Congress leader Indira Hridayesh on behalf of the State BJP president who had made derogatory remarks against her.

Uttarakhand BJP president Bansidhar Bhagat had referred to Ms. Hridayesh, who is Leader of Opposition in the State Assembly, as “arre budiya,” derogatorily calling her an “old woman”.

“Behan ji, I am extremely sorry today. We respect women and hold them in high esteem. I personally apologise to you and to all those who are hurt,” Mr. Rawat tweeted in Hindi late Tuesday night.

“Tomorrow, I will talk to you personally and again ask for forgiveness,” he said.

Mr. Bhagat has refused to apologise but “withdrawn” his remarks. Mr. Rawat’s apology came after the Congress leaders asked BJP president J. P. Nadda to take note of the remarks and instruct the party’s State unit chief to apologise. She also asked Prime Minister Narendra Modi to take cognisance of the remarks.

“Bansidhar Bhagat has used undignified and discourteous language for me. It has caused me extreme pain and hurt. The State president of any party represents his entire organisation and if he uses this kind of language, it also shows disrespect to women in general,” she said.

Women of this country and the State will never tolerate the way Mr. Bhagat has insulted women, Ms. Hridayesh said.

At an interaction with party workers at Bhimtal in Nainital district on Tuesday, Mr. Bhagat had mocked Indira Hridayesh. “Our Leader of Opposition says many MLAs are in touch with her. Who will be in touch with you, old woman? No one will contact a sinking ship. In fact, she herself is saying that she can come to BJP if she and her son are given a ticket,” he said.

“She is saying there will be an explosion. No one should be under any illusion, there will be no explosion. BJP stands very strong,” Mr. Bhagat said, referring to a prediction by the Congress leader about “explosive” developments regarding the BJP.

The BJP leader had shared his speech on Facebook. When contacted, Mr. Bhagat refused to offer an apology. “I did not say anything to hurt anyone. However, if my statement has hurt her, I withdraw my words,” he said.