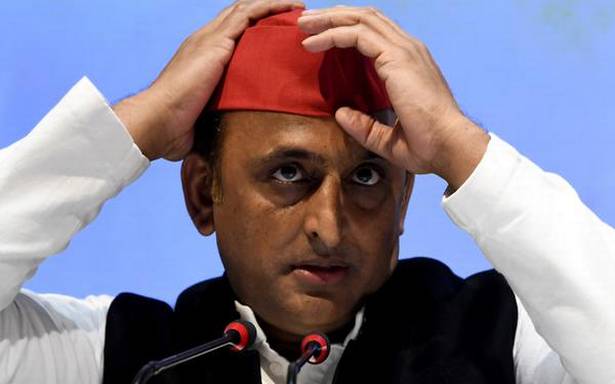 Talks for an alliance between the Samajwadi Party and the Azad Samaj Party headed by Dalit leader Chandra Shekhar Azad in the 2022 Uttar Pradesh election have apparently failed. Mr. Azad on Saturday said his outfit would not get into an alliance with the SP, accusing its president Akhilesh Yadav of insulting the “bahujan samaj”.

“Akhileshji is yet to understand the meaning of social justice. Social justice is not just talking about it. We are Kanshi Ram’s people. We talk of ‘jiski kitni sankhya bhari, uski utni hissedari’ [representation as per size in population],” Mr. Azad said here.

The Dalit leader from western U.P.’s Saharanpur, who stormed into the limelight through aggressive agitational Ambedkarite politics, said he held several meetings with Mr. Yadav but was left disappointed in the end.

The SP was not willing to grant the ASP more than two seats, Mr. Yadav said.

While Mr. Azad did not reveal how many seats he was offered or demanded, he blamed the SP chief for the failed negotiation. “At the end of it, I felt that Akhileshji does not need Dalits. They don’t want Dalit leadership in this alliance. They only want the Dalit to vote them,” Mr. Azad said.

A Jatav by caste and popular among the Dalit youth, especially in western U.P., Mr. Azad is looking to channelise the Bhim Army movement into electoral politics and fill the perceived vacuum left by BSP chief Mayawati’s absence from forcefully raising concerns and aspirations of the community.

Mr. Yadav said he had offered Rampur Maniharan in Saharanpur and Ghaziabad seat to the ASP.

The SP’s ally RLD was given the Rampur Maniharan seat but it was willing to give it up in favour of the ASP, said Mr. Yadav at a press conference.

“I gave him two seats. After that he dialled someone, whom I don’t know. He then came and told me, ‘My organisation is against me, I cannot contest election.’ Whose phone call was it? Whose conspiracy was it,” Mr. Yadav asked.

After adding several allies and leaders from the non-Yadav OBC castes, the SP also hopes to make a dent in the Dalit vote (21.5% of the State population).