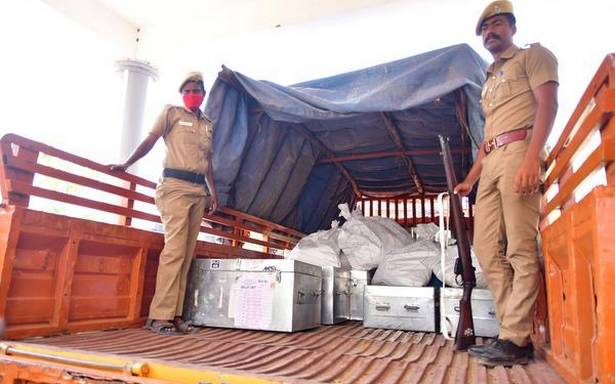 All the polling materials, including EVMs, VVPAT among others were dispatched to all the polling stations, said District Election Officer and Collector M Vijayalakshmi here on Monday.

The General Observer Babu Singh Jamod (Dindigul and Natham Assembly Constituencies) was present at the time of the dispatch of poll materials.

The Observer visited Sirumalai, a part of Natham constituency on Sunday and inspected the arrangements made in polling stations there, especially for the differently-abled persons, Tahsildar Saravanan said.

The DEO said that all the vulnerable stations identified have been provided with additional forces deployed by the Central agencies. Apart from the poll staff, micro-observers too would be monitoring these critical stations.

In the covid-19 situation, for the benefit of the voters, the Election Commission of India had reduced the number of voters per station to 1050 and enhanced the time up to 7 p.m. The Collector appealed to the voters to cooperate with the officials while stepping into the polling stations.

By adhering to physical distancing and self-discipline such as wearing face masks voluntarily and using sanitizers would help distance the virus. She urged the police personnel to ensure that there was no crowding anywhere inside or outside the polling stations.

The district has seven Assembly Constituencies and senior persons including minister Dindigul C Srinivasan, former ministers I Periasami and Natham R Viswanathan are testing their luck.