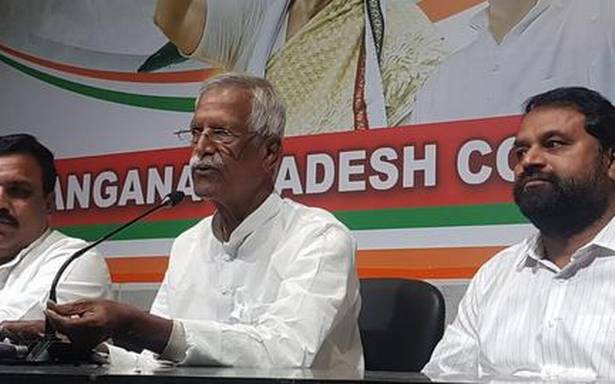 Telangana Congress leaders have claimed that pass books connected to over 25 lakh acres of agriculture land are yet to reach the owners due to the problems created by the unscientific implementation of the Dharani portal.

At a press conference here, vice president of AICC Kisan Congress M. Kodanda Reddy and TPCC spokespersons Addanki Dayakar and Belliah Naik said the implementation of Dharani has created immense problems and disputes, particularly to the small and marginal farmers leading to suicide and deaths.

They said the Congress teams toured the entire State meeting the farmers and trying to understand how the new Dharani portal has played havoc with their lives. Chief Minister K. Chandrasekhar Rao, who speaks highly of Dharani portal, is not aware of issues in the villages. “Situation is totally different from what the CM perceives,” Mr. Kodanda Reddy said.

He said such is the agony of people affected by the portal is that they equate it with the Patel-Patwari system and in fact, claim it was much better because the grievances could be brought to their notice. The party would soon organise a meeting of the farmers affected by the Dharani portal to expose how unfriendly the system had become.

Mr. Reddy said it was the Congress party that empowered the farmers streamlining land acquisition and ensuring that the farmers got the maximum benefit whenever the land was acquired. But the TRS government was working against the interests of the farmers and the Congress would side with the farmers to protect their interests.

Mr. Dayakar said the party discussed at length on how the government was willfully snatching land from the farmers. He alleged that small and marginal farmers were disappearing due to the policies of the Chief Minister and Telangana will once again see the feudal landlords holding large chunks.

Mr. Bellaih Naik said the government was deliberately denting the Forest Rights Act and the TRS leaders were resembling the feudal lords in snatching the rights of even tribal farmers. He said if Congress changed the peasants to farmers giving them land and restoring dignity the TRS was forcefully taking away lands from them even violating the provisions of the Land Acquisition Act.