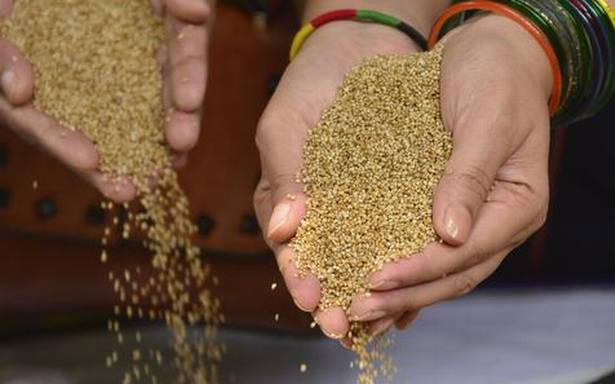 The humble millets are set to go global. Karnataka’s initiative as well as the Centre’s efforts to get international recognition for these nutrient-rich crops have yielded results with the United Nations (U.N.) declaring 2023 as the International Year of Millets.

The U.N. General Assembly recently adopted a resolution, sponsored by India and supported by more than 70 countries, declaring 2023 as the International Year of Millets. The resolution is intended to increase public awareness on the health benefits of millets and their suitability for cultivation under tough conditions marked by climate change.

The adoption of the resolution elated Karnataka’s farm sector as the State, spearheaded by the then Agriculture Minister Krishna Byre Gowda, had put in efforts to give a push to the idea after its experiments in organising international organic and millets trade fairs yielded encouraging results. The Centre, which was convinced about such a proposal, had played a decisive role in building consensus among the other countries.

However, the initial euphoria about the resolution getting adopted is now slowly paving way for anxiety among experts in Karnataka’s farm sector, which is one of the prominent cultivators of millets. This is because of the alleged lack of preparation and plan of action, both on the part of the State and the Centre, to capitalise on the U.N.’s declaration.

“The main intention behind the initiative is to help Indian millet farmers get decent revenues by capitalising on their crop getting international recognition. But they cannot get such a benefit unless we play a proactive role. The real success of observing international millet year comes only when we take measures to help our farmers reap the benefits,” said Mr. Gowda. “To do this, we must form a technical group of subject and policy experts to coordinate as well as lobby with the U.N., along with our diplomats concerned.”

In fact, India must now take a lead in popularising the theme in a strong manner at the international level through various campaigns, he said.

According to him, it is a rare occasion to help millet growers, who are mostly poor and marginal farmers from parched areas, and this has the potential to change the fortunes of millet growers. “So far, only spices and basmati rice are dominating the Indian exports. But now there is a golden opportunity to add millets to the export basket. But this can happen only if we really evolve a meticulous plan and work accordingly,” he said.

What is disappointing is that Karnataka appears to be doing nothing about this issue. There was no mention of it even in the State Budget and other forums, including the recently concluded legislature session. “The State should play a key role in at least taking up the issue with the Centre,” Mr. Gowda said.

He also sought to counter the argument that 2023 was still far away. “At the international level and on forums like the U.N., the calendar of events is drawn and finalised at least an year in advance. We are bound to lose the opportunity if we keep quiet now.”

T.N. Prakash Kammaradi, agricultural economist and former chairman of Karnataka Agricultural Prices Commission, observed that millets have three different dimensions of climate, nutrition, and cultural quotient. “This is because they are climate-resilient and suit dryland farming. Similarly, they have high nutritional value. They are also related to culture since they are an integral part of food habits,” he said.

Apart from holding an international campaign, there was a dire need to focus on production aspects, he said, pointing out that the area under cultivation of millets had decreased both in the State and the country. “If we need to capitalise on the opportunity of the U.N. declaring 2023 as the International Year of Millets, we need to plan well to expand the area under cultivation of millets by creating awareness among growers,” he said.