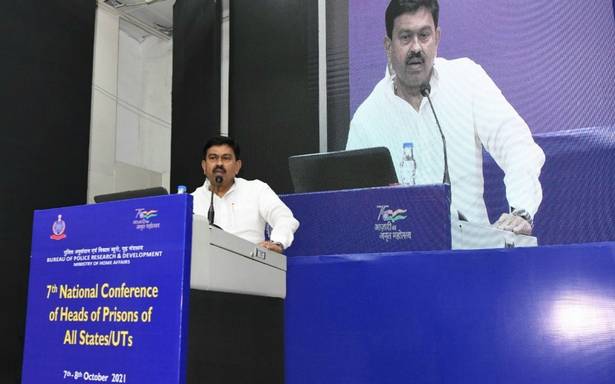 Opposition has been demanding Mr. Mishra’s ouster over the Lkahimpur Kheri violence; mediapersons not allowed to enter the BPRD campus.

Union Minister Ajay Kumar Mishra, whose son has been booked in a murder case for allegedly mowing down four farmers in Lakhimpur Kheri district of Uttar Pradesh, on October 7 inaugurated a national conference on prisons organised by the BPRD, a department of the Home Ministry.

The 61-year-old Minister of State for Home Affairs attended the conference at the headquarters of the Bureau of Police Research and Development (BPRD) in the Mahipalpur area of the national capital and addressed prison department officers who represented various states and union territories, officials said.

The two-day seventh national conference of heads of prisons of all States and Union Territories carries the theme of "preparing a decadal road map for the prisons and correctional services".

The BPRD said 75 senior prison officers from 25 States and four UTs are participating in the conference.

"Jail systems must have provisions for providing training and skill development for people living inside prisons and aftercare programmes," Mr. Mishra said, as per a Home Ministry statement.

"The concept of e-prisons saves time and makes the process easier for further associating with the courts and an another important aspect of e-prisons is e-mulakaat, which has made the process easy for inmates to contact their families," he was quoted as saying during the event.

Called as the national think-tank on police subjects, the BPRD on Wednesday had withdrawn the media invite for the event, saying it is being put on "hold and the invitation may be treated as cancelled".

Mediapersons who reached the venue on Octobner 7 were not allowed to enter the BPRD campus.

The opposition has been demanding the sacking of Mr. Mishra, the BJP Lok Sabha MP from Kheri, over the violence. Eight people were killed in the incident — four farmers, two BJP workers, a driver of the minister and a journalist working for a private TV channel.