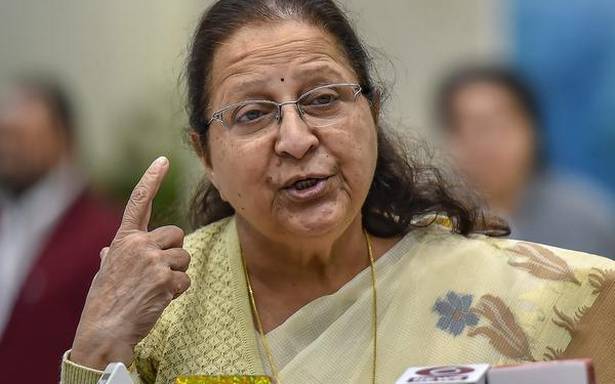 Local BJP leader and former corporator Sudhir Dedge lodged a complaint, on the basis of which a case was filed against an unidentified person under IPC section 188

Police in Indore registered an offence on Friday against an unidentified person for spreading rumours on social media about the death of former Lok Sabha Speaker Sumitra Mahajan, an official said.

Local BJP leader and former corporator Sudhir Dedge lodged a complaint, on the basis of which a case was filed against an unidentified person under IPC section 188 (disobedience to order duly promulgated by public servant), Sarafa police station inspector Sunil Sharma told PTI.

Along with his written complaint, Mr Dedge attached a screenshot of the social media post, which wrongly mentioned about the death of 78-year-old Ms Mahajan.

"With that, our cyber inquiry would try to trace the person who first spread the rumour," he added.

The police officer said that under section 144 of the CrPC, the district administration has banned such social media posts that may create law and order problems, he added.

Mr Dedge, a supporter of Ms Mahajan, in his complaint stated that the rumours about the former MP’s death deeply hurt him mentally and flared up people’s anger that may lead to public gatherings.

However, Mr Tharoor and others had later deleted the tweets after BJP leaders pointed out that she was fine.

After deleting the post, Mr Tharoor had said he was relieved that Ms Mahajan was doing fine and said he banked on "a reliable source" in putting out his tweet.

On Friday, Mr Tharoor said in a tweet, "Spoke to Sumitra Mahajan ji’s son to convey my sincere apologies at last night’s misinformation. He was most gracious & understanding.

Delighted to hear she is very much better. Expressed my best wishes to her & her family." The former Lok Sabha speaker’s son Mandar put out a video clip saying that his mother is perfectly fine and urged people not to believe in the false news about her.

"My mother is perfectly fine. Please do not rely on false news being spread about her. Her COVID report is negative. I met her only in the evening and she is healthy," he said in the video.

She earlier represented the Indore Lok Sabha constituency in Parliament for eight terms.