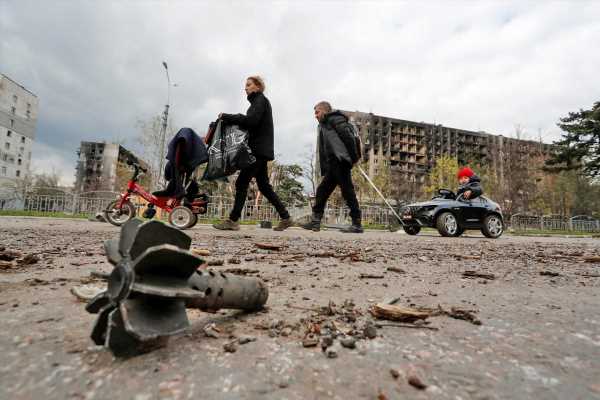 UN Secretary-General Antonio Guterres will meet Russian President Vladimir Putin and Ukrainian President Volodymyr Zelenskyy next week, as he steps up diplomatic efforts to ‘silence the guns’ in Ukraine.

Guterres will visit Moscow where on April 26 he will “have a working meeting and lunch with Foreign Minister Sergey Lavrov and will be received by President Vladimir Putin,” Eri Kaneko, associate spokesperson for the secretary-general said on Friday.

Over five million people have fled the east European country, and thousands have been killed since Russia launched a ‘special military operation’ against Ukraine on February 24.

“Next week, I will meet with President Vladimir Putin in Russia and President Volodymyr Zelenskyy in Ukraine. We need urgent steps to save lives, end the human suffering and bring about peace in Ukraine,” Guterres tweeted.

Following his visit to Russia, Guterres will also travel to Ukraine next week.

“He will have a working meeting with Foreign Minister Dmytro Kuleba and will be received” by Zelenskyy on April 28, the UN spokesperson’s office said.

“He wants to discuss with the leadership steps that can be taken right now in order to silence the guns, in order to help the people and in order to allow the people who need to get out to do so safely,” Kaneko said in response to a question at a briefing.

As he said in his letters to both Presidents, Guterres hopes to talk about what can be done to bring peace to Ukraine urgently and the future of multilateralism, as both countries are founding members of the United Nations.

In March, 141 countries in an emergency session of the General Assembly supported a resolution condemning the war and urging Russia to immediately withdraw its forces from Ukraine.

Earlier this week, Guterres had written to Putin and Ukraine’s President Volodymyr Zelenskyy to receive him in Moscow and Kyiv “to discuss urgent steps to bring about peace in Ukraine.”

Spokesperson for the Secretary-General, Stephane Dujarric, had told reporters on Wednesday that two separate letters were handed over to the Permanent Missions of the Russian Federation and Ukraine.

“In these letters, the Secretary-General asked President Vladimir Putin to receive him in Moscow and President Volodymyr Zelenskyy to receive him in Kyiv. The Secretary-General said, at this time of great peril and consequence, he would like to discuss urgent steps to bring about peace in Ukraine and the future of multilateralism based on the Charter of the United Nations and international law,” Dujarric said.

The UN chief has noted that both Ukraine and Russia are founding members of the United Nations and have always been strong supporters of the organisation.

Guterres has called for a 4-day Holy Week humanitarian pause beginning on Holy Thursday and running through Easter Sunday, April 24, to allow for the opening of a series of humanitarian corridors.

He has voiced disappointment that many good-faith efforts by many parties to reach a ceasefire in Ukraine have failed.

He stressed that the humanitarian pause would provide the necessary conditions to ensure the safe passage of all civilians willing to leave the areas of current and expected confrontation, in coordination with the International Committee of the Red Cross.

More than 12 million people need humanitarian assistance in Ukraine today. Of those, more than one-third are in Mariupol, Kherson, Donetsk and Luhansk.

“We anticipate that this figure will increase to 15.7 million — that’s about 40 per cent of all Ukrainians still left in the country,” he said.

“For all these life-or-death reasons, I call on Russians and Ukrainians to silence the guns and forge a path to safety for so many at immediate risk.”

Guterres added that this year, Holy Week is being observed under the cloud of a war that represents the total negation of the Easter message.

“Instead of celebration of a new life, this Easter coincides with a Russian offensive in eastern Ukraine. The intense concentration of forces and firepower makes this battle inevitably more violent, bloody and destructive.

“The onslaught and terrible toll on civilians we have seen so far could pale in comparison to the horror that lies ahead. This cannot be allowed to happen,” he said adding that hundreds of thousands of lives hang in the balance.

During his visit, Guterres will also meet with staff of UN agencies to discuss the scaling up of humanitarian assistance to the people of Ukraine.

“They have left behind their homes and families. Many would do anything, and some even risk going back, to see their loved ones. But every new attack shatters their hopes. Only an end to the war can pave the way for rebuilding their lives,” he said.