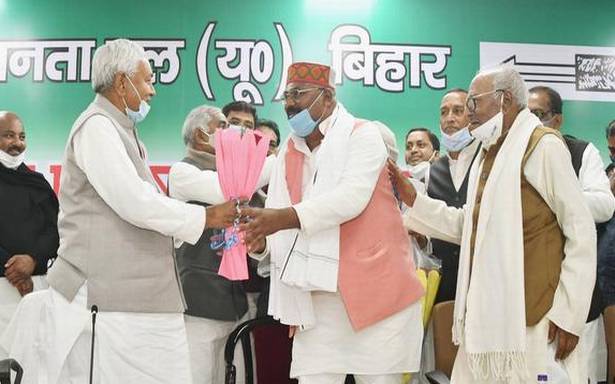 Election of Umesh Kushwaha was ratified at the party’s state council meeting in Patna.

Former legislator Umesh Kushwaha was on Sunday unanimously elected as the Janata Dal (United) Bihar unit president, in a bid to strengthen the ruling party’s old “Luv-Kush” support base.

Election of Mr. Kushwaha, a former party MLA from Mahnar assembly constituency in Vaishali district, was ratified at the party’s state council meeting in Patna.

Choice of Umesh Kushwaha signals the ruling party going back to its original support base of “Luv-Kush” (OBC Kurmi and Kushwaha castes combination).

Since 2005 when the JD(U)-BJP together uprooted RJD from the power in Bihar, Mr. Kumar himself a Kurmi by caste has been leveraging Luv-Kush equation to corner major portion of non- Yadav OBC castes in the Bihar poliotics.

Yadavs form bulk of the OBC votes in Bihar politics at nearly 14 percent. But, kumar by bringing together two other OBC castes of Kumri and Kushwaha increased his base to around 12-14 per cent, to counter Lalu Prasad.

Recently, Mr. Kumar himself stepped down as the JD(U) national president and named his close confidant RCP Singh as his successor.

Mr. Kushwaha contested the 2020 assembly elections on JD(U) ticket from Mahnar assembly constituency but lost to the RJD candidate.

He had won the 2015 state polls from the same Mahnar seat defeating his BJP rival then.

Lalan Singh was talking to reporters on the decisions taken at the meeting of state executive and state council in the past two days.

Mr. Singh said that Bashishtha Narayan Singh expressed his willingness to be relieved of the party chief’s responsibility and proposed Mr. Kushwaha’s name for the post which was approved by the state council.

Mr. Singh said that he will continue to guide the party as “Margdarshak”, Singh, the JD(U)’s leader in Lok Sabha, said.

Speaking on the occasion, the newly elected state president, thanked Chief Minister Nitish Kumar and party’s national president RCP Singh for posing faith in him and asserted that he would try to live up to their expectations by working hard to strengthen the party.

Mr. Kushwaha said youths will be given opportunity in the party whose organisational structure will further be strengthened upto village level.