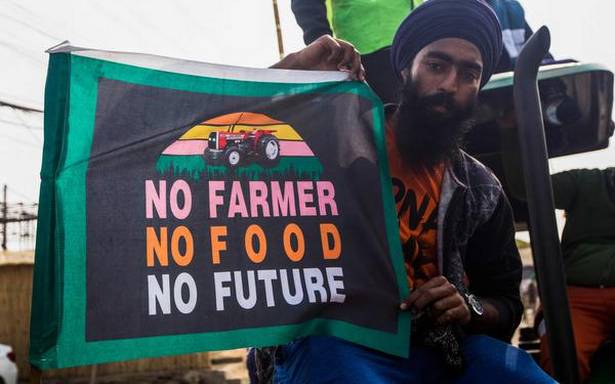 Without any MSP or government procurement for crop, middlemen are the one who benefit, says union

Uttar Pradesh’s farmers face higher losses in comparison to their counterparts in Kerala, Punjab and even Jharkhand, due to the current regime of patchy procurement at minimum support prices which are not comprehensive, according to the All India Kisan Sabha.

Farm unions are continuing their agitation calling for the ruling BJP to be voted out in Uttar Pradesh’s upcoming Assembly polls, arguing that while the Centre’s repeal of farm laws will prevent future catastrophe, a new law guaranteeing comprehensive MSP rates for all farmers is needed to deal with the current agrarian crisis.

“This struggle was never just about the repeal of the three black laws. The main problem is yet to be solved,” Ashok Dhawale, president of the Communist Party of India-affiliated AIKS, said on Wednesday, explaining why protesters are not going home yet.

As part of the unions’ Mission-Uttar Pradesh campaign, the AIKS claimed that the prevailing market price of paddy in Uttar Pradesh was just ₹1,100 per quintal, lower than the ₹1,960 per quintal rate set by the Centre as MSP, and significantly lower than the ₹2,590 per quintal which would be the MSP if imputed costs of capital assets and rental on owned land was taken into account in calculating the cost of production as recommended by the Swaminathan Commission.

Several other major Uttar Pradesh crops do not benefit from the MSP regime at all, including potatoes, pulses and sugarcane. Although Uttar Pradesh is the country’s largest potato producer, its farmers sell their crop at ₹300 to 400 per quintal, while the vegetable retails at five to six times that amount, said the AIKS. Without any MSP or government procurement for the crop, big traders and middlemen are the one who benefit rather than the farmer, added the union.