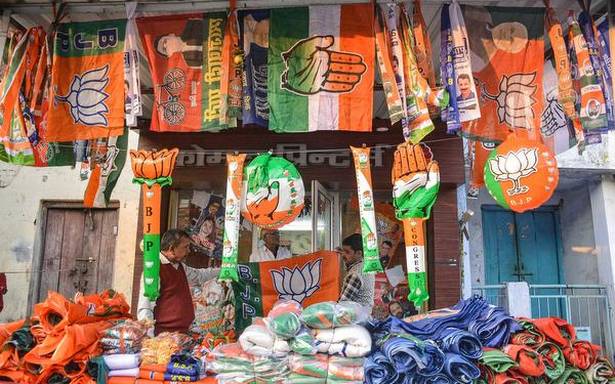 In Badaun in west Uttar Pradesh, BJP MP Sanghamitra Maurya is weighing her options after her father Swami Prasad Maurya’s exit from the party. People from OBC and Dalit communities are, meanwhile caught between religious appeals and material concerns.

In less than 24 hours, two senior Ministers, both hailing from the OBC community, have quit the Yogi Adityanath-led Uttar Pradesh government.

Both, Swami Prasad Maurya and Dara Singh Chauhan, have accused the Bharatiya Janata Party (BJP) government in the State of neglecting the Dalits, farmers, youth and people from the backward sections. Five MLAs have also followed suit.

Ms. Maurya is among the very few BJP MPs who have openly demanded a caste-based census. During the monsoon session of Parliament in August, 2021, she put her own party in a spot when she praised the government claiming it had granted “the power to the States for caste census”.

While she has not yet revealed if she will follow her father or stay put in the saffron party to try and champion the cause of the OBCs, the voters in Badaun have their own issues and political preferences and say Mr. Maurya’s resignation does not change that. She could not be reached for a comment.

Nemchand, a Dalit daily-wage worker from Kori community, says electric poles were installed in his neighbourhood in Bilsi Assembly constituency, under the previous Samajwadi Party (SP) government but for the last five years there is no light.

“I voted for the BJP last time but look at the condition of our neighbourhood,” he says, pointing towards a pond next to his house which was half-filled with garbage. “We have knee-deep water on roads during rainy season and the water also enters our houses sometimes.”

He adds that he will still vote for the BJP but “I will ask the leaders when they come for campaigning”.

Sitting with him next to a bonfire, Bhanuprakash Gupta, who owns a small Kirana shop, says, “ ‘Hindu hone ke naate ye humara dharm hai’ (It is our duty as a Hindu).”

He, however, says their sitting MLA, Radha Krishna Sharma (who recently quit the BJP for the SP) never came back to their area. “He never showed his face after the elections and did nothing for us but I will again vote for the BJP.”

Interrupting Mr. Gupta, Shyam Swarup Kashyap, who hails from Kashyap OBC community, asks how the BJP is a party for the Hindus.

“They say BJP is making the Ram temple, but what about the temple in our neighbourhood,” Mr. Kashyap asks, heading towards a famous and old Hanuman temple in Bilsi.

“Everybody cannot go to Ayodhya. If they really cared about Hindus, there would be at least street lights around our temple.”

Mr. Kashyap also says that he voted for the SP in the 2012 Assembly election but went with the BJP wave in 2017. “This time I am going back with the SP. Dharmendra Yadav [former Budaun MP] gave us a medical college in our district, started 108 ambulance service,” he firmly says.

When asked about Mr. Maurya’s resignation, Mr. Kashyap says he is an able leader who always raised the voice of the poor and marginalised. “He is right that the poor has been neglected in this regime. Even though they have provided us with free ration, it’s not enough, he says.

Mr. Nemchand’s neighbour, Triveni Devi, also a Kori Dalit, who works as a house help, says nobody in her family has a ration card despite visiting the local Tehsil many times. “We have young children to feed and educate. How do we survive in just ₹250-300 a day,” she asks.

Some people in the neighbourhood also complain of not receiving any money under the Pradhan Mantri Awas Yojna. “We all applied for it but only 2-3 families have received it so far,” Triveni Devi’s husband Ramavtar says.

Mr. Nemchand, who earlier said he would vote for the BJP, got emotional and said, “Because of all these problems, we think we will cancel all of them [opt for NOTA].”

Thakurdas Maurya, a construction worker from Badaun’s Bisauli constituency, says it does not matter if the father-daughter duo quits the party, he will go with the BJP only. “Why won’t he quit, his motive is fulfilled now. He will either go with Mahan Dal [led by Keshav Dev Maurya] or Jan Adhikar Party of Babu Singh Kushwaha but I don’t think he will join the SP,” Mr. Thakurdas Maurya said.

He says he also got financial aid and ration from the BJP government during the lockdown and “the SP never did anything for the Maurya community”.

Another construction worker from Sahaswan Assembly constituency, Devendra Pal Yadav says the SP’s victory is certain. “Look at Maurya ji [Swami Prasad Maurya]. He himself is coming with us,” he says taking a dig at Thakurdas Maurya.

In Ambiyapur village, Ram Chander, who is a small farmer and also owns a Kirana shop, says he voted for the BJP last time but will choose Akhilesh Yadav as his Chief Minister now.

Listing out a number of issues, he starts with the problem of stray cattle ruining the crops. “We have to keep vigil throughout the night to save our crops,” he says.

Ram Chander also agrees with Swami Prasad Maurya and says the BJP government has done nothing for the youth. He then points towards his son and nephew at the shop saying, “Both of them are graduates and have been trying to find work but the government hasn’t done anything about it. They had gone to Delhi for work but had come back due to the pandemic.”

Sitting with him, a 71-year-old retired school teacher, Priyendra Kumar Sharma, raises the issue of rising prices of LPG cylinder, petrol and diesel. “They used to cry earlier when petrol prices used to go up by ₹1 or ₹2 and today they themselves are selling it at ₹100. This government is running on dictatorship. Whatever those two [Prime Minister Narendra Modi and Mr. Adityanath] say or do is right and no other opinion matters for them.”

He admits to have voted for the BJP in 2017 but says will choose SP this time.