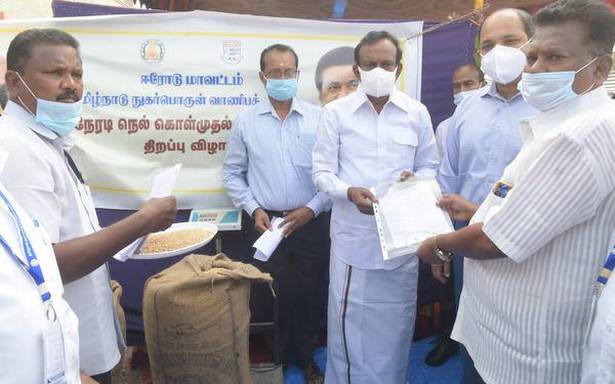 To procure paddy from the farmers in Kalingarayan ayacut areas, Direct Purchase Centres (DPC) were inaugurated at Vairapalayam and B.P. Agraharam on Wednesday.

Minister for Housing and Urban Development S. Muthusamy and Collector H. Krishnanunni inaugurated the centres that would be run by the Tamil Nadu Civil Supplies Corporation.

Officials said that Grade ‘A’ variety paddy will be procured for a minimum support price of ₹ 2,060 a quintal, including an incentive of ₹ 100, while the common variety will be purchased for ₹2,015 a quintal with an incentive of ₹75. After the procurement, funds would be transferred to the farmer’s bank account through Electronic Clearing Services (ECS) within three days, they added.

Also, under the Sustainable Green Cover in Farm Lands Scheme, 3,11,800 saplings worth ₹46.77 lakh are to be distributed to farmers in the district. The Minister distributed saplings to farmers and inaugurated the scheme.

Officials of the Agriculture and Farmers Welfare Department said that saplings were obtained from the Forest Department at ₹15 each and would be distributed to farmers at free of cost. They said that each farmer would be given a subsidy of ₹ 7 a saplings from the second year to fourth year for growing the tree.

Addressing the media, Mr. Muthusamy said that Chief Minister M.K. Stalin would soon be visiting Erode to inaugurate completed works and also lay foundation for new projects. Also, he would distribute welfare assistance to the people, he added. The Minister said that farmers should register in the portal before bringing their produce to the DPCs so that they need not wait at the centres. He said that steps were taken to demolish depilated buildings in schools and new buildings would be constructed.