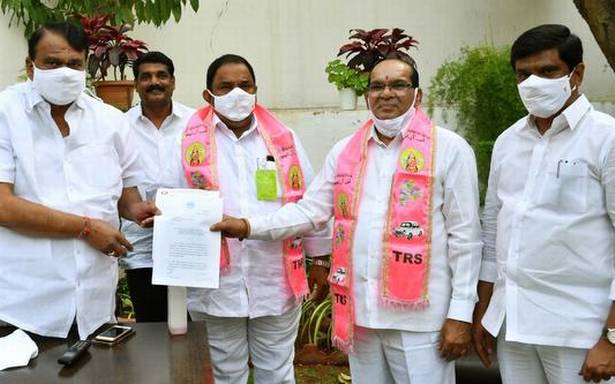 The two-member Telugu Desam Party was merged with the ruling TRS in the Assembly on Wednesday after they submitted a letter to Speaker Pocharam Srinivas Reddy requesting him to recognise them as members of the ruling party.

One of the two members, Sandra Venkata Veeraiah had already unofficially quit TDP and announced his decision to join the TRS last year. On Wednesday, it was the turn of the other member Mecha Nageswara Rao to announce his resignation from the party and join the TRS.

Both Mr. Veeraiah and Mr. Nageswara Rao later met the Legislative Affairs Minister V. Prashant Reddy seeking to merge TDP with TRS. Mr. Reddy arranged their meeting with Chief Minister K. Chandrasekhar Rao who, as TRS president, conceded the request and wrote to the Speaker to admit them into the party. They also met the Speaker to complete the formalities.

After they handed over the letter to the Speaker, sources said the latter found merit in the proposal as it will not attract provisions of anti-defection law because the two members constituted the total membership of TDP in the Assembly. The law envisaged that two-thirds of members of a party were enough for effecting the merger. The Legislature Secretary V. Narasimha Charyulu issued a bulletin formalising the merger wherein he said the Speaker had positively considered the two letters received from TDP members and the TRS president. Accordingly, they will now be allotted seats along with members of TRS in the Assembly.

The strength of TRS in the 119-member Assembly went up to 104 with the latest addition. In June 2019, twelve of eighteen Congress members who constituted two-thirds of the party merged with the TRS in a development that led to the Congress Legislature Party leader Mallu Bhatti Vikramarka forfeiting his position as Leader of Opposition.

In a statement, he said Mr Nageswara Rao had won the 2018 Assembly election from Aswaraopeta owing to the tireless efforts by the TDP cadres. Terming his reported decision to switch over to the TRS as an “opportunistic” move under the garb of development, he demanded that Mr Rao resign his MLA post and seek re-election from Aswaraopeta Assembly constituency before joining the TRS.