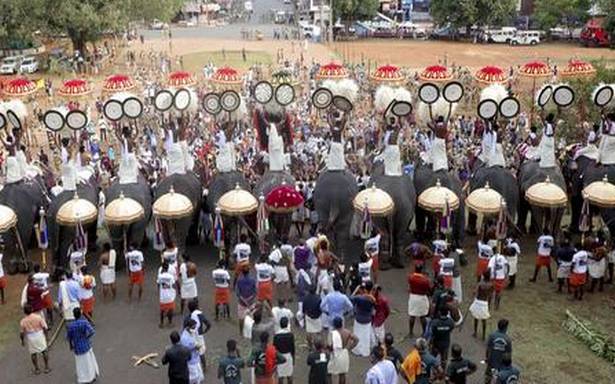 Two people killed and more than 25 people, including police personnel, were injured, when a branch of a tree fell over the Madathil Varavu procession of Thiruvambadi Devaswom in the wee hours of Saturday. Condition of two persons injured in the accident is critical.

The accident happened during the night edition of the Madathil Varavu Panchavadyam of the Thiruvambadi Devaswom progressing under a huge banyan tree near the Brahmaswam Madam. The branch of the tree fell over the percussion artists. Around 40 people, including the organizing committee members and the police, were present at the time of mishap.

Nobody noticed the sound as the percussion ensemble was going on. Before they could escape, the branch fell over them. Many people, including the Mela Pramani Kongad Madhu, got trapped under the branch. However, he suffered only minor injuries. According to reports, some people were electrocuted when the branch fell over a power line.

The elephant Kuttankulangara Arjan, which was paraded for the function, ran amok in the melee. It was brought under control later. The fire personnel rescued those who were trapped under the branch. The injured are being treated at the General hospital and Thrissur Medical College Hospital.

Following the mishap, Paramekkavu and Thiruvambadi devaswoms called off the Pooram fireworks. However, as removal of the already loaded fireworks is risky, the explosives will be destroyed by both Devaswoms by busting them.