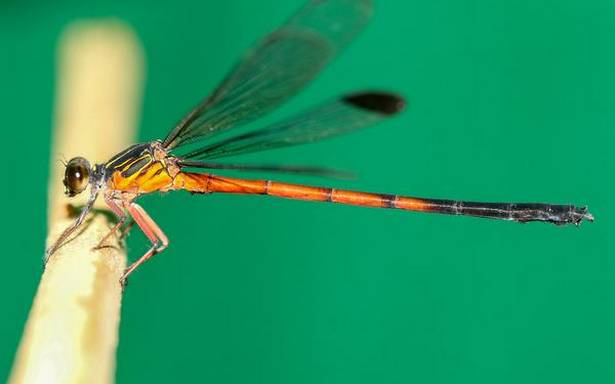 Never ceasing to surprise, the biodiversity-rich Western Ghats has thrown up more odonate species. Researchers from Thiruvananthapuram and Mumbai have collaborated to discover two damselfly species from Satara district in Maharashtra, which forms part of northern Western Ghats.

The new endemic damsels, Euphaea thosegharensis and Euphaea pseudodispar, belonging to the genus Euphaea, were discovered by a team comprising Sriram Bhakare, Pratima Pawar and Sunil Bhoite from Mumbai and Kalesh Sadasivam and Vinayan Nair representing the Thiruvananthapuram-based Travancore Nature History Society. The specimens were spotted by Dr. Bhakare in May 2020 at Thoseghar in Satara district.

Prior to the findings, only three endemic species of Euphaea were known from Western Ghats. These include Euphaea fraseri, a very common species in the forested foothills of Western Ghats and is found from Kanyakumari to Maharashtra; Euphaea dispar, which is restricted to the north of the Palakkad Gap from South Kanara and Coorg to Nilgiris; and Euphaea cardinalis, a montane species found south of the Palakkad Gap in Anamalais, Palnis and Agasthyamalai Hills.

Euphaea thosegharensis is similar to Euphaea cardinalis, while Euphaea pseudodispar is similar to Euphaea dispar but can be easily separated by its colouration and morphology. They are restricted to the high elevation streams and riparian patches of Satara district around Thoseghar and Kaas lake in Maharashtra. The discoveries have been published in the recent issue of Journal of Threatened Taxa.

According to Dr. Sadasivan, the species could have been overlooked for long due to their superficial similarity to other Euphaea species. Dr. Bhakare, whose keen eye led to the discovery, called for more systematic surveys of odonates in northern Western Ghats.