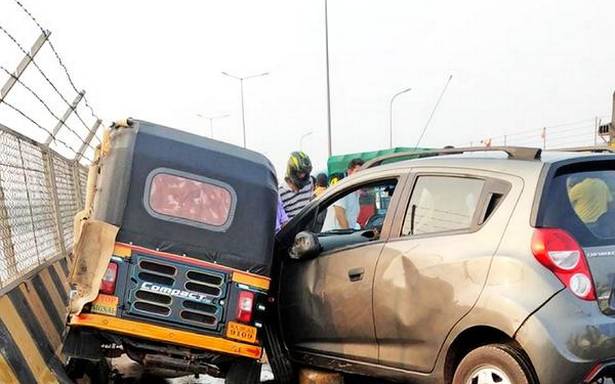 Shyam Raj, an autorickshaw driver, died in a freak mishap on the Netravathi bridge off Jeppinamogaru on Saturday morning, when a car with a Kerala registration plate hit a tempo, and later his autorickshaw.

Complainant Ibrahim told police that he was transporting fish from the Mangaluru Fishing Harbour along with his son Shabir in his tempo.

When he was driving on the Netravathi bridge, the car being hit his tempo and later the autorickshaw. The autorickshaw driver was thrown out of the vehicle and was crushed under the wheels of the car, the complainant said. While Ibrahim received minor injuries, Shabir escaped unhurt.

However, Shyam Raj was declared brought dead at the Wenlock Hospital, the complainant said adding the accident occurred due to the rash driving of car driver Vaibhav.

The Traffic South Police have registered a case and are investigating.

In another accident reported from Vitla police limits, autorickshaw driver Hamid alias Ammi, 35, died on the spot after hitting an oncoming car on Saturday morning.

Police said the accident occurred near Kodaje Mutt between Mani and Puttur on NH 275.

The autorickshaw driver reportedly lost control over the vehicle resulting in the collision. His wife, who was travelling in the rear, escaped with minor injuries while the occupants of the car remained unhurt. Vitla police have registered a case and are investigating.

A motorcyclist died after a bus his two-wheeler in Venur police limits on Saturday. The police gave the name of the deceased as Jabir, 34, resident of Poyyegudde, who had recently returned from abroad. The accident occurred near Padangadi Gram Panchayat office. The bus was on its way from Dharmasthala to Udupi. Venur police have registered a case and are investigating.