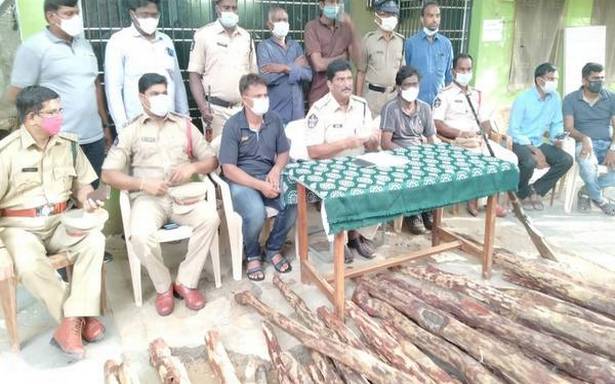 Country-made rifles recovered from the accused

The sleuths of the Red Sanders Anti-Smuggling Task Force (RSASTF) arrested two persons on charge of smuggling the precious logs during a combing operation in the KVB Puram reserve forest in Chittoor district on Thursday and seized country-made rifles from their possession.

Teams led by Circle Inspector Venkata Ravi, Reserve Inspector Krupanand and Forest Range Officer Prasad had been conducting the combing operations in the thick forest for the last three days.

On Thursday, the combing party came across some people carrying chopped red sanders logs on their shoulders in the Theerthalakona area.

“Seeing the police, the group dumped the logs and fled. However, two members of the group were nabbed after a chase,” Deputy Superintendent of Police (RSASTF) Muralidhar told the media in Tirupati.

The accused have been identified as A. Anjaneyulu (50) from Sadasivapuram and Satravada Krishnaiah of S.L. Puram. The police have registered a case and investigation is on.