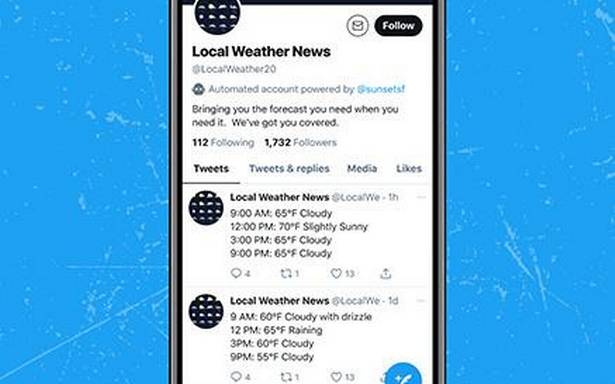 Twitter on Thursday said it will begin rolling its new application and review process for account verification on Twitter, almost three and a half years after pausing the programme.

The U.S.-headquartered firm added it is also working on ways to indicate automated and memorialised accounts.

A verified account on Twitter gets the ‘blue tick badge’ which is one of the ways people can distinguish the authenticity of accounts that are of high public interest.

“Today’s application roll-out marks the next milestone in our plans to give more transparency, credibility and clarity to verification on Twitter,” the company said in a blog.

It added that going forward it would continue expanding the ways people can express themselves on Twitter through their profile and introducing new account types.

“We’ve been doing ongoing research on automated accounts and plan to introduce a way to denote this account type in the next few months, with memorialised accounts to follow,” Twitter said.

Along with the new application, Twitter has also introduced new guidelines for verified accounts on the platform. These verification guidelines are intended to encourage healthy conversations for the betterment of the Twitter community overall, it said.

There are currently six categories that qualify for verification, including government, companies, brands and organisations, News organisations and journalists, entertainment, sports and gaming, and activists, organisers, and other influential individuals. “We know that the current verification policy may not represent all of the people who should be eligible to be verified on Twitter, so we’re planning to introduce more categories later this year, such as those for scientists, academics, and religious leaders,” it said.

For verification, the account must be complete with a profile name, profile image and either a confirmed email address or a phone number. “Your account must also be active within the last six months and have a record of adherence to the Twitter Rules,” Twitter said.

Over the next few weeks, everyone on Twitter will start to see the new verification application directly in the account settings tab. Once a user submits their application, they can expect an emailed response from Twitter. If the application is approved, the blue badge will automatically appear on the user profile.

The microblogging platform had paused the verification programme “after hearing feedback that it felt arbitrary and confusing to many people.” In November last year, it had announced that it will be re-launching the account verification process, while also asking the public to share feedback on a draft of its new policy.

“Over the past several months, we’ve been working to bring clarity to the verification eligibility criteria and launched a new policy shaped by public feedback. We also started enforcing that policy by automatically removing the verified badge from accounts that no longer meet the updated criteria for verification, such as those that are inactive or incomplete,” it added.