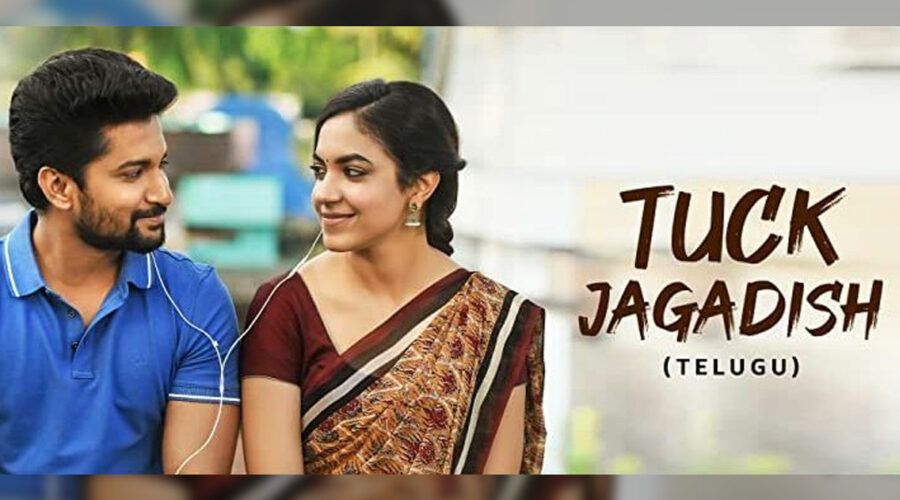 Story: In a village Bhudevipuram, Aadisesh Naidu (Nasser) is a well-known landlord. He has three sons and two daughters. Elder son Bose (Jagapathi Babu) and younger son Jagadish Naidu (Nani) were born to his first wife, but the rest are from his 2nd wife Arjunamma.  Jagadish Naidu is the most loved and youngest member of the Aadisesh family and he is loved by his father, step-mother, four siblings and nieces.  The twist arises in the tale after the death of Aadisesh Naidu. This creates a big rift between Jagadish Naidu and his elder brother Bose (Jagapathi Babu). How  Jagadish Naidu puts the things back together, form rest of the story.

Performance:   Once again Nani has given riveting performance in Tuck Jagadish. His performance and body languages are top-notch. He is the heart and soul of Tuck Jagadish.  Ritu Varma does a good job in the role of Gummadi Varalakshmi and gives able support to Nani in the film. Jagapathi Babu gets a meaty role and he does well  but his role lacks strength. Malaa Parvathi in the role of mother adds strength to the sentiment scenes. Daniel Balaji as a villain is ok  but is not used well in this film. Naresh, Rao Ramesh, Rohini, Devadarshini  and others justify with their roles. Aishwarya Rajesh does a decent job and she performs very well in it.

Technical:  The story of Tuck Jagadish is predictable. The director has mixed the elements properly in this film to create interest. Thaman and Gopi Sundar  have done a fantastic job. The songs are good on the screens and the background music is good. Cinematography in eye candy and the some  warning dialogues  are simple but  are written well. Editing is ok. Production values  of Shine Screens are excellent.

Analysis: Tuck Jagadish is a typical village based family drama that deals with rural backdrop rivalries, land disputes, and killings. Coming to the  work of director Shiva Nirvana, he has done an ordinary job with the film.