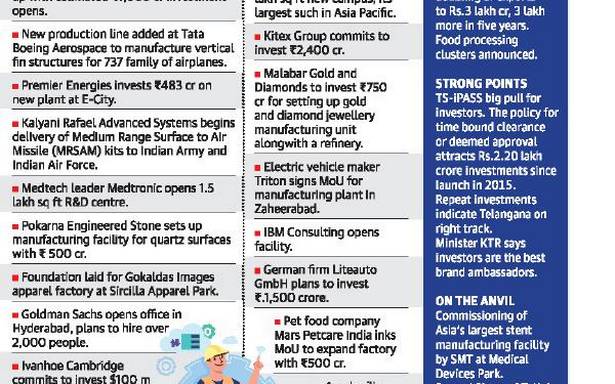 It was a challenging year like no other, yet Telangana put up a commendable show on the industries front in 2021 with an emphasis on continuing to attract investments, facilitating operations of businesses and policy initiatives to become a preferred destination for firms in emerging sectors such as e-mobility.

A combination of approaches apart, it was the pre-eminent position of Hyderabad as vaccine capital of the world and pharmaceutical hub of the country that maintained the spotlight on the State and helped generate more interest from investors.

The year began with Bharat Biotech getting emergency use authorisation for Covaxin, from the Drugs Controller General of India, making the vaccine a key arsenal in the country’s fight against COVID-19.

Information Technology (IT) was another industry where Telangana sought to build on its position as a hub. U.S. life insurer Massachusetts Mutual Life Insurance Company (MassMutual), leader in medical technology Medtronic, investment banking major Goldman Sachs, global financial services firm J.P. Morgan, IBM Consulting, Genpact Affine, Larsen & Toubro Infotech and 3i Infotech were some of the companies that either opened facilities or announced plans to invest and raise headcount.

The New ICT Policy of the State is eyeing doubling of IT exports to ₹3 lakh crore and creating more than three lakh additional jobs over the next five years. In doing so, the emphasis will also be on encouraging IT firms to set up operations in tier II cities.

The year, however, will be best remembered for the State government successfully wooing Kitex Group to invest, especially by despatching a private aircraft to fly the garment makers top leadership to Hyderabad from Kerala. Impressed by the response and offer, the Group, which at that point was also evaluating other States, entered into an MoU and announced it will invest ₹2,400 crore in Telangana. The Kitex Group is expected to commence operations in Warangal in November 2022.

Another major investment commitment Telangana got in 2021 was also from a Kerala entity when Malabar Gold and Diamonds said it will be setting up a gold and diamond jewellery manufacturing unit along with a refinery with an estimated investment of ₹750 crore.

Defence and aerospace, which is another sector for which Telangana is known, also saw several investment and expansion announcements during the year, including Boeing adding a new production line at its joint venture, Tata Boeing Aerospace, in Hyderabad, to manufacture vertical fin structures for the 737 family of airplanes.

While consolidating its position in pharmaceuticals, defence and aerospace and IT, the State has turned its focus on food processing, as part of which it has unveiled plans to set up clusters across the State, electric mobility and renewable energy.