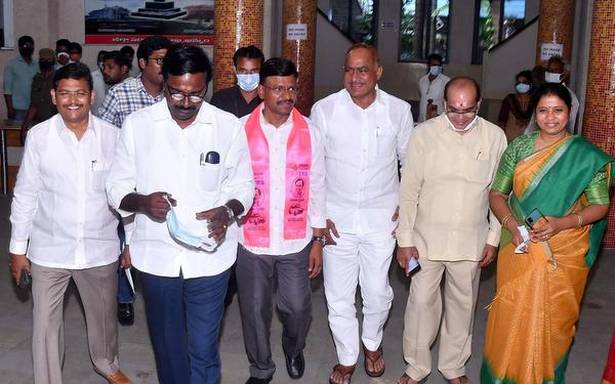 The ruling Telangana Rashtra Samithi (TRS) fielded its incumbent MLC Pochampally Srinivas Reddy from the Warangal Local Authorities Constituency for the biennial election to the State Legislative Council slated to be held on December 10.

Mr. Reddy, accompanied by Panchayat Raj Minister E. Dayakar Rao and Women and Child Welfare Minister Satyavathi Rathod and others, filed his nomination papers at the Collectorate in Warangal on Monday.

In Khammam, TRS State secretary Tata Madhu filed his nomination papers as the TRS candidate from the Khammam Local Authorities Constituency for the ensuing MLC election.

In Karimnagar, as many as 13 candidates filed their nomination papers from the Karimnagar LAC on Monday.