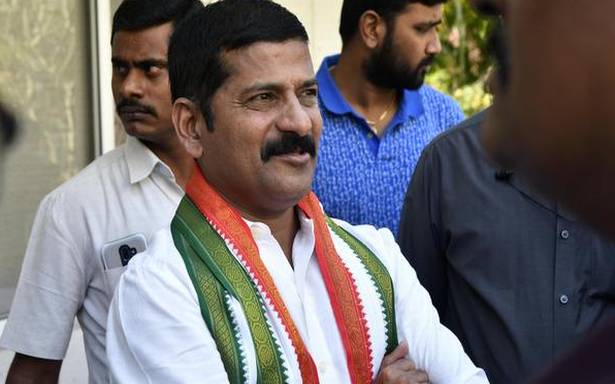 He questioned the absence of TRS MPs from the Parliament in a letter to TRS working president, K.T. Rama Rao.

Congress MP and Telangna Pradesh Congress Committee (TPCC) working president, A. Revanth Reddy questioned the absence of the Telangana Rashtra Samithi (TRS) MPs from the Parliament when the entire Opposition was protesting on the rising fuel prices, and attributed it to the party’s fear of the Modi government.

In an open letter to the TRS working president, K.T. Rama Rao, he said KTR’s expression of support to the people of Andhra Pradesh against the privatisation moves of the Vizag Steel Plant was mere lip service.

A person who has failed to respond to my challenge for a dharna at Jantar Mantar against the BJP for denial of projects to Telangana is interestingly extending support to the people of Andhra Pradesh. "He is not brave enough to fight for the rights of Telangana but wants to extend support to Andhra Pradesh. This is nothing but deceiving Telangana people," he alleged in his letter.

The Congress MP claimed that KTR’s statements should be seen in the light of MLC elections as the TRS was afraid to take on the BJP or even question its step-motherly treatment of Telangana. "Everyone knows the TRS is in cahoots with the BJP and it fears to question it on the right platforms," he said demanding that the TRS MPs attend Parliament and raise the same issues there. "Your ability to deceive people has crossed State borders now," he said.

The TRS and BJP act as opponents in Telangana while they work together in Delhi, he said, while also reminding how the TRS had supported all the decisions of the BJP government inside and outside the Parliament. He reiterated his challenge to sit on a dharna at Jantar Mantar for the projects assured for Telangana in the A.P. Reorganisation Act. People have elected the MPs to question the government on behalf of the people but the TRS MPs are silent.