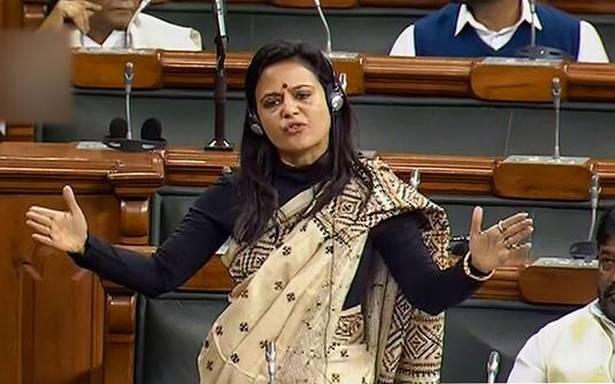 Ms. Moitra also sought the high court to prepone the date of hearing in her petition which is listed on February 18

Trinamool Congress MP Mahua Moitra Thursday urged the Delhi High Court to stay the proceedings before a trial court in a defamation case filed against her by Zee News and its editor.

Ms. Moitra, who has challenged the summons and framing of charges against her in the case, also sought the high court to prepone the date of hearing in her petition which is listed on February 18.

Justice Mukta Gupta recorded the statement of the counsel for Zee Media Corporation Ltd that they will not get their witness examined before the trial court till the matter comes up for hearing in the high court on February 18.

Ms. Moitra has challenged the trial court’s September 25, 2019 and January 10, 2020 orders by which she was summoned as accused and charges were framed against her in the defamation case respectively.

Senior advocate Kapil Sibal, representing Ms. Moitra, sought preponement of the date of hearing of her petition before the high court on the ground that the defamation case is listed before the trial court on Friday, that is, January 8.

He said when the petition was filed in the high court in August last year and the court was to consider granting an interim order, the counsel for the media house had said the trial was not likely to start on the next date.

On this statement, the high court had noted that no interim order was required to be passed at this stage, Mr. Sibal said, adding that similar orders were passed on November 5, 2020.

He pointed out that the case is listed before the trial court on Friday for recording of the complainant’s evidence and urged the high court to stay the proceedings before the lower court.

Advocate Vijay Aggarwal, representing the media house, made a statement in the high court that they will not get the complainant witness examined before the trial court on Friday and will seek adjournment.

The high court after recording his statement, disposed of the fresh application filed by Ms. Moitra.

On January 10, 2020 the trial court had framed charges against the politician for the alleged offence of criminal defamation under the IPC.

Senior advocate Vikas Pahwa along with advocate Adit S. Pujari, also representing Ms. Moitra, had earlier submitted before the high court that no opportunity was given to Ms. Moitra by the trial court to seek discharge and to advance her arguments that no case was made out and she was summoned without considering that the remarks were made by her without requisite intention.

The politician said these proceedings were a counterblast to the defamation complaint filed by her against the Zee news editor-in-chief Sudhir Chaudhary.

Mr. Aggarwal said Ms. Moitra has approached the high court instead of moving the sessions court and there was a delay in filing the petition.

The offence of defamation provides a simple imprisonment which may extend up to two years.

The trial court had on December 17, 2019 granted bail to the politician on a personal bond of ₹20,000, after she appeared before it in pursuance to the summons issued against her.

It had earlier asked the parties whether there was possibility of settlement between the parties.

The suggestion was, however, denied by Ms. Moitra who said they had a "substantive" case separately going on in another court.

The case relates to Ms. Moitra’s June 25, 2019 speech in Parliament on the ‘Seven Signs of Fascism’ and a TV show run by the news channel and other subsequent developments.

Zee News has filed the defamation complaint against Ms. Moitra for allegedly making statements against the channel to the media.

The alleged defamatory statements against the channel were made by the MP while she was speaking to reporters on allegations against her.

Prior to that, Ms. Moitra had filed a criminal defamation complaint against Zee News and its editor-in-chief, Sudhir Chaudhary, in connection with a show aired by it on one of her speeches delivered in Parliament.

The court had on November 4, 2019 summoned the accused in the case filed by the politician.