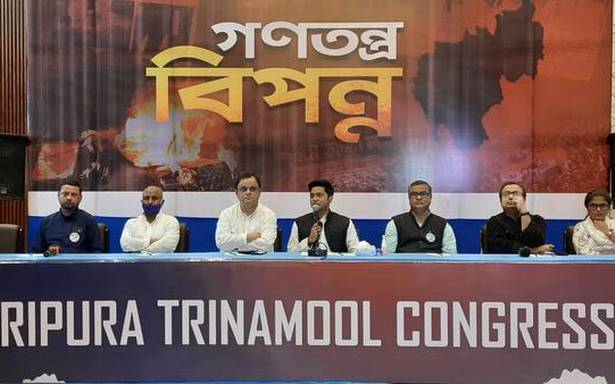 “BJP goons attacked our leaders and workers inside the police station. They did not even spare journalists, police officers and personnel”, Mr Banerjee said.

The Trinamool general secretary spoke to newsmen after authorities denied permission to his road show to campaign for the polls to the Agartala Municipal Corporation and 12 municipal bodies due for November 25.

Mr. Banerjee said violence in Tripura had been continuing and the police remained silent spectators despite a Supreme Court order which directed the Government to ensure peace and security to ranks of all political parties during the municipal polls.

The Trinamool on Monday moved a contempt petition in the apex court and warned that the party would drag all erring officials to the court.

Mr. Banerjee alleged that total anarchy and lawlessness prevailed in Tripura, and the reason for the violence was to prevent the Trinamool, which was ‘fast gaining a support base in the State’.

“If Saayoni Ghosh can be arrested for uttering two words ‘Khela Hobe’ [Will Play] from her car then top central BJP leaders should also be arrested for raising the same slogan during the West Bengal Assembly elections”, Mr. Banerjee stated.

“Scam-tainted and corrupt leaders from a State [Bengal] are spreading canard about Tripura. They are creating a law and order situation, but we will not allow them to disturb peace in the State”, Mr. Deb told an election rally at Ambassa in Dhalai district.

“We argued and sought bail for her under sub-section 1 of IPC Section 437. Police have demanded her remand for two days which has been rejected”, Ms. Ghosh’s lawyer Shankar Lodh told newsmen.

TMC’s Rajya Sabha Member Sushmita Dev hailed the release of Ms. Ghosh. She alleged that the case against the actress-turned-politician was politically motivated.