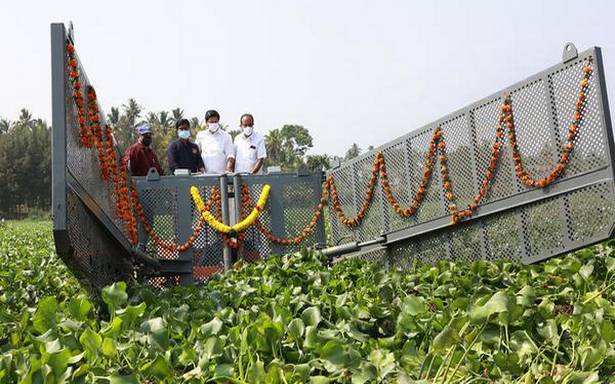 The Irrigation department has acquired a silt pusher for desilting and removing debris from canals and water bodies.

Minister for Water Resources Roshy Augustine inaugurated the trial run of the machine in Akkulam lake on Tuesday. The Netherlands-made machine acts as a ‘‘water bulldozer’‘ and can remove silt from a depth of 1.5 metres, he said.

The dozer blades, which can be adjusted up to 9 metres in width, can be used to push and remove silt and water weeds, said Mr. Augustine. The machine is capable of removing silt from 100 cubic metres in an hour.

The Irrigation department had announced plans to purchase the silt pusher last year as part of a project to clean the canals passing through the city, primarily Amayizhanjan canal. Last year, the government had cleared a ₹25-crore proposal for the desilting and reconstruction of Amayizhanjan Canal stretch from Kannammoola to Akkulam.

The work involves side protection works and dredging, KWA sewerage line connection and conveyance of silt to a disposal site. Mr. Augustine said the machine can also be used to clear the water bodies in other regions, including Kuttanad.