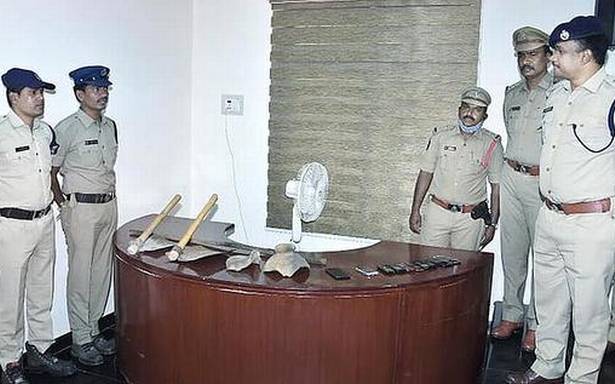 Police are on the lookout for two more who fled

The Anantapur police, which have tightened vigil at the places of worship following the reports of desecration of idols elsewhere in the State, busted a gang of treasure hunters and arrested 11 persons, while two more are on the run.

Ten cellphones, three motorcycles, some broken earthen pots, two shovels, and a crowbar were seized from the accused.

“A gang of 13 people allegedly tried to dig in a cave in search of treasure at Nallagutta in Diguvuchekkavaripalli village in Tankallu Mandal on Saturday. Kadiri Deputy Superintendent of Police S. Bhavya Kishore and Circle Inspector T. Madhu raided the cave and arrested 11 of the accused, while two managed to escape,” Superintendent of Police B. Satya Yesu Babu told the media here on Sunday, adding that the police were on the lookout for those fled.

Acting on a tip-off that the gang was digging a cave, the police raided the place. The accused have been identified as Anjaneyulu, the kingpin hailing from that village, Shaik Shafi, Patarla Venkataramana, P. Nagaraju, J. Srinivasulu, N. Anjaneyulu, Pappireddy Suryanarayana Reddy, N. Mohammed Ghouse, Sayyed Hayat Basha, Shaik Babjan, and Epuri Narsimhalu. Mallikarjun from Kadiri and Kottayya from Chitvel village in Kadapa district escaped from the scene. “The gang reportedly had heard from their ancestors that many people had searched for treasures at that place where pots filled with precious material were believed to have hidden there. The gang conducted a survey for three days after a cattle-rearer told them about the spot. On Saturday, they were digging the palce when the police party raided,” the SP added.