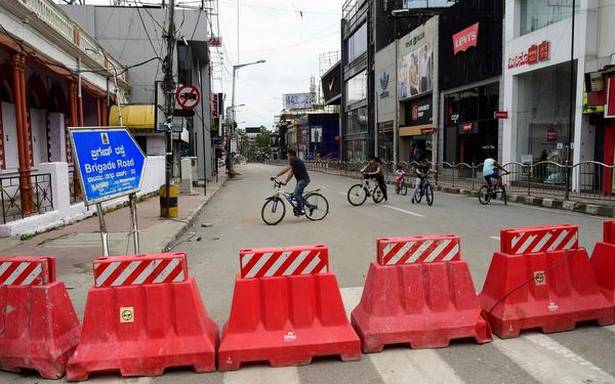 In the two months since most commercial establishments shut shop due to lockdown restrictions imposed by the Karnataka government to control the spread of the second wave of COVID-19, business came to a standstill, but not rent. Faced by huge losses and insistence by landlords on payment of rent in full even during the lockdown months, many proprietors had no choice but to wind up their businesses and vacate the premises.

Even as the city prepares for further easing of restrictions from Monday, many establishments may not re-open for business. In the face of bleak prospects, traders want the Karnataka government to step in, broker a formula between tenants and landlords, and regulate rent. Many have called for intervention on the lines of what the government did to keep a check on private school fees last year during the first wave of COVID-19.

Suhail Yusuff, secretary, Brigade Shops and Establishments’ Association, said, “At least 30 shops on Brigade Road, including showrooms of leading multinational clothing and lifestyle brands, have shut down over the last two months. Similar is the case on M.G. Road, Church Street and Commercial Street. One of the main drivers is the demand by landlords for payment of full rent for even the months when the city was in lockdown.”

The pattern is replicated in other commercial hubs as well.

“Most of us haven’t paid rent for March. Some landlords are offering to accept rent for lockdown months in instalments. But this doesn’t help us,” said Sajjan Raj Mehta, a senior trader from the wholesale hub of Chickpet in the Old Pete. “In the last 15 months, there has been a lockdown for five months. Even during the remaining 10 months, business has been very dull. We are not in a position to absorb the rent for these months.”

Traders feel that the best solution is some form of regulation in rent collection.

“The law is heavily loaded in favour of landlords. Tenants and landlords do not have an equal relationship. Hence, it is important that the government step in and broker a formula for rent, like it did for private school fees,” said Mr. Yusuff.

Arun Kumar A.R., Secretary, Malleswaram Commercial Forum warned that landlords will not accept this option unless the government has something to offer them. “They must be provided relief in property tax, electricity bills and other payables to the government,” he explained.

Chickpet MLA Uday Garudachar, who owns the chain of Garuda Malls, said none of the tenants had paid rent for the past two months, and there were reports that 30% of businesses would close down. “We too have costs. Last year, we brokered a formula where both we and the tenants absorbed the losses. We cannot bear maintenance bills and payables to the government, including taxes, on our own,” he said.

Jagannath Reddy, who owns a commercial complex in north Bengaluru, said rent was the sole income for many landlords. He opposed the very idea of government intervention. “Technically, education is a not-for-profit sector in the country. Hence, government intervention can be defended. But the government cannot and must not intervene in business,” he argued.