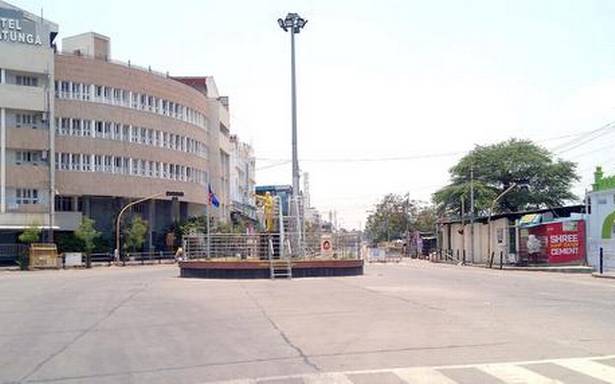 The weekend lockdown imposed for the containment of rapidly spreading COVID-19 evoked a good response in the districts of the Kalyana Karnataka region on the second day on Sunday.

Towns and cities across the region largely wore deserted looks as most of the commercial establishments, except for those offering essential goods and services, remained closed and vehicular movement thin. Police vehicles were found patrolling the city blowing sirens and appealing to the people through loudspeakers to remain indoors.

Since the district administrations had deployed teams in places where people tend to assemble in large numbers, including markets, on Friday itself with a view to sensitise the people on the weekend lockdown, these busy places also wore a deserted look on Saturday and Sunday. People were allowed to visit grocery shops and buy essential commodities between 6 a.m. and 10 a.m.

In Kalaburagi city, police took strict action against people who ventured out without any valid reasons. In some places, they even beat up those found on the roads and who could not give the police any valid reason for venturing out. Shops in Super Market, Kapda Bazaar, SVP Chowk, China Market, Kirana Bazaar and other areas that are heavily crowded on normal days remained closed.

Mariyammanahalli Police in Hosapete taluk, Vijayanagara district, seized 25 vehicles that were on the roads in violation of the lockdown norms.

Police Sub-Inspector M. Shivakumar, along with his staff, was found beating people who were out on the streets without any valid reason.

Kottur Tahsildar G. Anil Kumar fined motorcyclists outside the NEKRTC Bus Stand in the town. COVID-19 awareness teams in Koppal visited the residential localities in the city and surrounding villages and undertook a campaign there.

The police heavily barricaded many places, including Ambedkar Circle, Basaveshwara Circle, Teen Kandeel, Chandramouleshwara Circle and Gandhi Chowk, to prevent vehicular movement. The administration collected over ₹1.20 lakh in fine from those who were out on the roads on Saturday and Sunday in violation of the lockdown norms and seized over 100 vehicles.