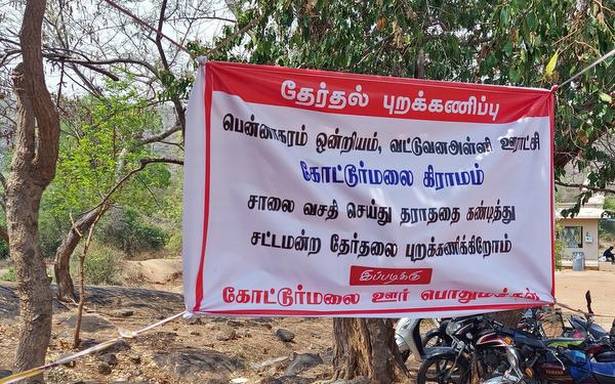 Tough terrains did not deter voters in several parts of the western districts to cast their vote on Tuesday.

Voters in Malliamman Durgham in Bhavanisagar and Kathirimalai in Anthiyur Assembly constituencies that could be reached after trekking rough jungle terrains for nine km exercised their franchise in the Assembly election on Tuesday.

Both these settlements are located inside the reserved forest areas and are inaccessible to reach by vehicle. The villages have no mobile connectivity and solar lights light up the houses. While poll materials are transported in a pick-up van to reach the Panchayat Union Middle School at Malliamman Durgham that has 427 voters, two donkeys ferried materials to the Government Tribal Residential Middle School at Kathirimalai that has 134 voters.

Due to poor road connectivity, over 50 families from Malliamman Durgham moved to Kadambur many years ago in search of jobs and schools for their children. On Tuesday, over 100 voters visited their settlement in pick-up vehicles, cast their votes and returned to Kadambur.

At Navamalai, a remote tribal hamlet located 10 km from Aliyar, in Coimbatore district, 170 of the 275 voters had exercised their franchise by 1 p.m.

The hamlet has about 50 houses of tribal people and employees of the Electricity Department. Vellachi, who does not know her age, says her husband, daughter, son-in-law and she visited the polling station, located about a half a km from her house, early to cast their votes.

“There are no jobs here. If we need to earn we need to go to the plains,” she says. Banumathi, who runs a grocery store, says the Department staff, who were residents of Navamalai but transferred and are yet to get their votes registered in the new location, visit the hamlet during election.

Of the three hill hamlets of Kottur, Alakettu and Erimalai in Pennagaram Assembly constituency that declared poll boycott over motorable road, Kottur with 327 votes stood its ground and boycotted the polls without casting a single vote. The other two hamlet residents refused to cast their vote until afternoon. The villages at an elevation with a 7-km trek have never had a road and had relied on donkeys to transport their rations and the ballot boxes for every election.

With unmotoroble terrain, the residents decided that they would not vote if that vote would not fetch them the bare minimal amenity of a road. This year, the hamlets with over 700 votes declared a poll boycott and stood firm till afternoon. However, soon after officials intervened, Alakettu and Erimalai were convinced to cast their votes.

(With inputs from S.P. Saravanan in Erode, M. Soundariya Preetha in Coimbatore and P.V. Srividya from Dharmapuri)