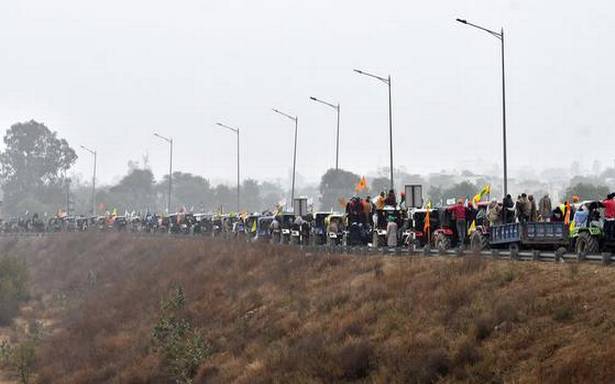 Will farmers’ protest be a problem like Tablighi Jamaat, Supreme Court asks Centre

Chief Justice of India Sharad A. Bobde has voiced the Supreme Court’s apprehension that mass gatherings of protesting farmers will lead to a “problem similar to the Tablighi Jamaat congregation” in March 2020 amid the COVID-19 pandemic.

This is just ‘rehearsal’ for their proposed January 26 tractor parade, unions say.

U.S. Vice-President Mike Pence and Speaker of the House Nancy Pelosi stand at the Capitol in Washington on January 7, 2021 after reading the final certification of Electoral College votes during a joint session of Congress. Violent protesters loyal to President Donald Trump stormed the Capitol on the previous day disrupting the process. | Photo Credit: AP

The formal certification by the Joint Session came in the wee hours of January 7. The Joint Session which resumed its meeting late on January 6 after it was disrupted by hundreds of supporters of incumbent President Donald Trump who violently stormed the Capitol Hill.

The nation’s elected representatives scrambled to crouch under desks and don gas marks as rioters stormed the Congress.

In a communiqué, the Union Health Ministry said vaccine will be supplied to the identified consignee points of 19 States and Union Territories by the supplier. The vaccine for remaining 18 States and UTs will be received from their respective government medical store depots.

Sourav Ganguly discharged from hospital, says he is absolutely fine

A press statement issued by the hospital said that the report of his routine blood tests was satisfactory and his ECG was normal.

The Supreme Court, in a press release on January 7, rebuffed being the “source of information” for recent media reports about complaints making “insinuations” against members of the higher judiciary and the “likely” action Chief Justice of India Sharad A. Bobde may take on them. The release stated that in-house procedure on such complaints was “totally and wholly confidential”. The court “never” released such information.

Bahujan Samaj Party and BJP MLA Madan Dilawar have filed separate appeals against an order of the Rajasthan High Court which asked the Speaker to decide within three months a disqualification petition against the six-MLA BSP Legislature Party ‘merging’ with the Congress.

It kicks in on January 8 until February 7, and centres around asking restaurants and bars to close at 8 p.m. and people to stay home and not mingle in crowds.

Petrol price was hiked by 23 paise per litre and diesel by 26 paise a litre.

Facebook bought the platform in 2014, and gradually changed the way it accessed user data from WhatsApp. The social networking company is now showing WhatsApp users a ‘take it or leave it’ attitude with the latest policy update.

The Brisbane Test is due to start on January 15 and the quarantine rules will restrict the players to just their hotel rooms after day’s play.

Australia vs India, 3rd Test, Day 1 | ‘Will’ finds a way for Australia before Labuschagne, Smith take hosts to 166/2 at stumps

At stumps, Labuschagne was unbeaten on 67 and Smith, after his uncharacteristic run of low scores so far, seemed out of the woods with 31 confident runs, which included five authoritative boundaries. Labuschagne found the fence eight times. This was after debutant Will Pucovski, riding on some luck, made 62 on debut to break the shackles for the under-fire side.