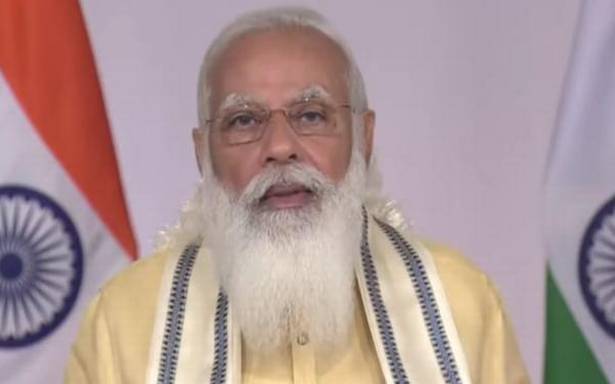 Prime Minister Narendra Modi addressed the nation at 5 p.m. on Monday, hours after announcing the same on Twitter. Mr. Modi’s address came in the wake of the second COVID-19 wave that peaked in April-May.

The Supreme Court on June 7 agreed to intervene after the National Commission for Protection of Child Rights (NCPCR) sounded the alarm on a spate of complaints about illegal adoption of children orphaned by COVID-19 through private individual and organisations.

Schools which have pending internal and practical assessments for Class 12 must complete them through online mode only and submit the marks by June 28, the Central Board of Secondary Education (CBSE) said in a notification on Monday.

A 12-hour hunger strike by people of various islands in Lakshwadeep got under way around 6 a.m. on Monday. The people observing hunger strike on their house premises are demanding that the Union government recall Administrator Praful K. Patel immediately.

The University of Mysore, in association with a Hyderabad-based pharmaceutical company, has designed a rapid COVID-19 detection kit. Announcing this at a press conference here on Monday, former Vice-Chancellor of University of Mysore, K.S. Rangappa, and Vice-Chancellor G. Hemanth Kumar said the kit has been developed in association with Lorven Biologics Private Limited.

Domestic air travel likely to get easier for fully vaccinated

The Ministry of Civil Aviation is “examining” a proposal to dispense with the need for a negative RT- PCR test report for fully vaccinated passengers for domestic air travel, a senior government official said.

A gene-editing tool that has led to new cancer therapies and a rapid test for COVID-19 is now helping scientists find endangered species of salmon in the San Francisco Bay.

The BJP’s uncharacteristic move to change the chief minister with less than a year to go for polls in Uttarakhand surprised many when it happened, but a couple of months down the line, the party is looking at going into the polls next year on the basis of collective leadership rather than the face of the new chief minister.

As the retail price of petrol crossed ₹100 in several cities, former Congress president Rahul Gandhi on Monday called it a ‘tax collection epidemic’ by the Central government.

Amarinder orders extension of restrictions to June 15 with certain relaxations

Punjab Chief Minister Amarinder Singh on Monday ordered extension of COVID restrictions to June 15 with certain relaxations, including opening of shops till 6 p.m. and private offices to function at 50% strength.

England fast bowler Ollie Robinson was suspended from international cricket pending an investigation into discriminatory tweets he posted from 2012-13. Robinson will not be available for the second Test against New Zealand starting Thursday, the England and Wales Cricket Board said on Sunday.

Apart from the three contentious farm laws, procurement and agricultural market price-related failures have contributed to a fivefold increase in major farmers’ protests since 2017, according to data collated by the Centre for Science and Environment (CSE).

06/07/2021 India Comments Off on Top news of the day: Three more vaccine candidates are in the pipeline, says PM Modi; Domestic air travel likely to get easier for fully vaccinated, and more
India