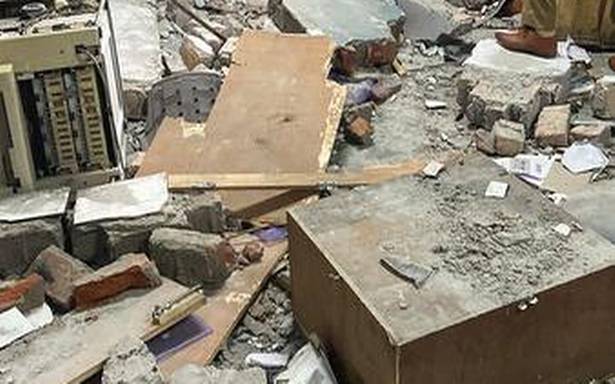 One dead, three injured in explosion at Ludhiana court complex

The blast that took place in the wash room of the second floor of the court complex was so powerful that one of the walls in the complex got damaged and windows of some vehicles parked in the premises were shattered.

Pockets with low vaccination coverage and those with low COVID-19 exposure may be more vulnerable to the new Omicron variant, the Centre says.

Besides, around 89% of India’s adults have been administered the first dose, according to Health Ministry officials.

All 34 persons were already in hospital isolation and were being monitored, Health Minister Ma. Subramanian told reporters.

The Karnataka Protection of Right to Freedom of Religion Bill, better known as anti-conversion bill, was adopted in the legislative Assembly by a voice vote amidst a dharna by the principal opposition Congress, which demanded withdrawal of the Bill.

What is the Karnataka Protection of Right to Freedom of Religion Bill? Which other States have a similar legislation?

If the Governor gives assent to the bill, Madhya Pradesh will become the third BJP-ruled State in the country after Uttar Pradesh and Haryana to have this kind of law.

The incident occurred at a school in Sukhidhang in Champawat district. A day after her appointment as the ‘Bhojanmata’ earlier this month, students stopped eating the meal cooked by her because of her caste and began bringing their food from home in tiffin boxes. Reportedly, out of 66 students in the school 40 had refused to eat the meal prepared by her.

Cow is mother, sacred to us, says PM Modi

Taking a jibe at rival parties, he said those making jokes on cows and buffaloes forget that the livelihood of crores of people depends on “pashudhan” (livestock). “Cow is mother and sacred to us,” he said, adding that some find it as “sin”.

India seeks return of democracy, proposes to ‘renew efforts’ for a stable Myanmar

The 59-year-old Maldivian Minister of Foreign Affairs is fully vaccinated along with a booster jab.

Omicron less likely to put you in the hospital, studies say

Government has issued advisory to carmakers to introduce flex-fuel engines in vehicles: Gadkari

Flex-fuel, or flexible fuel, is an alternative fuel made of a combination of gasoline and methanol or ethanol.

Comeback man Kidambi Srikanth might clash with Singapore’s Loh Kean Yew in a rematch of their World Championships final after being drawn in the same half, while P.V. Sindhu and Lakshya Sen received easy draws in the Yonex-Sunrise India Open 2022 to be held from January 11 to 16.

Pujara said the recent overseas success has made India a confident unit and that will reflect in the three-Test series.

12/23/2021 India Comments Off on Top news of the day: One dead, three injured in explosion at Ludhiana court complex; Centre tells poll-bound States to ramp up COVID-19 vaccination, and more
India