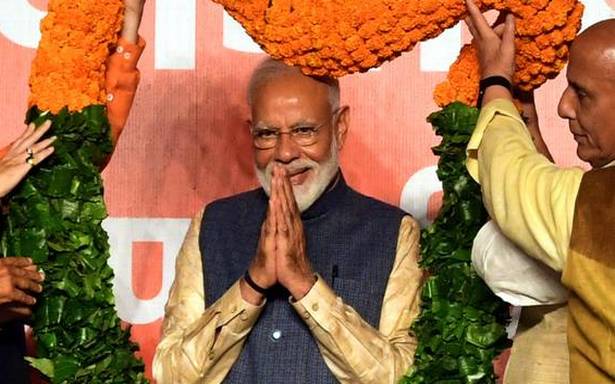 Prime Minister Narendra Modi, who came back to power with a massive mandate in the 2019 Lok Sabha Elections, was unanimously selected as the NDA Parliamentary Party Leader by 535 newly elected NDA MPs.

A crucial meeting of the Congress Working Committee (CWC) on Saturday unanimously rejected Rahul Gandhi’s offer to resign as party president after the Lok Sabha poll debacle and authorised him to overhaul and restructure the party at all levels.

Cow vigilantes beat up three in M.P. for possession of beef; police arrest them and their victims

Suspected cow vigilantes allegedly thrashed two persons in Madhya Pradesh’s Seoni with sticks, accusing them of carrying beef, following which five accused have been arrested, police said on May 25.

Sri Lankan President Maithripala Sirisena will attend Prime Minister Narendra Modi’s swearing-in ceremony scheduled to be held in New Delhi on May 30, according to an official at the President’s office.

U.S. President Donald Trump and Prime Minister Narendra Modi have agreed to meet at the G-20 Summit in Japan on June 28 and 29. “The leaders look forward to seeing one another at the G-20 Summit in Osaka, where the U.S., India, and Japan will hold a trilateral meeting to pursue their shared vision for a free and open Indo-Pacific,” the White House said on May 24.

Violent incidents were reported from across West Bengal on May 25 in which one person died and many were injured, officials said, as a face-off brewed between the ruling Trinamool Congress and a surging BJP after the Lok Sabha results were declared.

The death toll in the massive fire in a commercial complex in Gujarat’s Surat has increased to 23 on Saturday. A day after the tragedy, the police on Saturday arrested the owner of the coaching centre where many students and some teachers died.

Cyril Ramaphosa was sworn in for a five-year term as South Africa’s President on Saturday, with a delicate fight against government corruption ahead of him. The inauguration followed his ruling African National Congress party’s 57.5% victory in this month’s election. It was the party’s weakest election showing since the ANC took power at the end of the harsh system of racial apartheid in 1994.