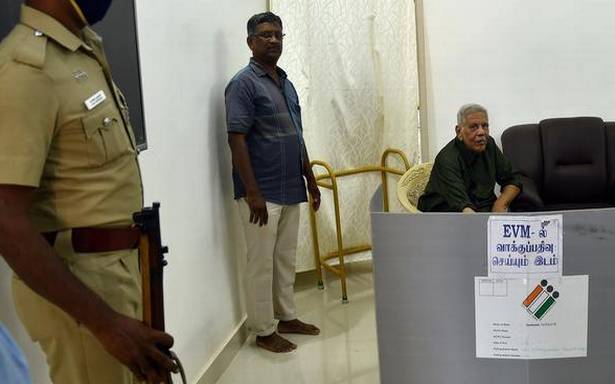 Former Jammu and Kashmir chief minister and Peoples Democratic Party president Mehbooba Mufti has been denied a passport after an "adverse" report by the Criminal Investigation Department (CID) of the J&K police.

The stranded container ship blocking the Suez Canal for almost a week was re-floated on Monday and is currently being secured, Inchcape Shipping Services said, raising expectations the vital waterway will soon be reopened.

The Congress has filed a police complaint against Assam Chief Minister Sarbananda Sonowal, BJP chief JP Nadda, state president Ranjeet Kumar Dass and eight leading newspapers for "camouflaging an advertisement as news" predicting the party’s victory in all the seats in Upper Assam that went to polls in the first phase on March 27.

The Indian Army has gifted one lakh doses of India-made anti-COVID-19 vaccines to the Nepal Army as part of the efforts of the militaries of the two neighbours to enhance bilateral cooperation.

Eight States including Maharashtra, Karnataka and Punjab have reported a high number of daily COVID-19 cases and account for 84.5% of the 68,020 fresh cases recorded in the country in a day, the Union Health Ministry said on March 29.

Will not allow other countries to push for ‘separatism in the guise of power devolution’, says Gotabaya Rajapaksa

Sri Lanka will not allow other countries to achieve their geopolitical needs by introducing “separatism under the guise of power devolution” in the island nation, President Gotabaya Rajapaksa has said.

All-rounder Thisara Perera became the first Sri Lankan to hit six sixes in an over in any form of professional cricket during a domestic tournament near here.

There are 537 critical polling stations and over 10,800 vulnerable polling booths across Tamil Nadu, Chief Electoral Officer Satyabrata Sahoo said here on Monday. However, the figures would be revised if there was a need, and based on representations from political parties.

Only 5.4% of houses under Centre’s flagship scheme reached completion so far this year

Less than 6% of houses sanctioned under the Centre’s flagship rural housing scheme in 2020-21 have reached completion so far this year, with COVID-19 stalling progress, the Rural Development Ministry told a Parliamentary Standing Committee last month. However, some States such as Odisha and Jharkhand used the scheme to provide employment opportunities for migrant workers who returned to their villages during the crisis.

State board schools in Tamil Nadu are still awaiting detailed guidelines on how students of classes 9 to 11 who have been declared ‘all pass’ will be awarded marks.

The Supreme Court has directed police stations to send accident information reports to Motor Accident Claims Tribunals and insurers within 48 hours of the road mishap.

Tokyo Olympics 2021 | Overseas ticket holders may get only partial refunds

Many fans living outside Japan who bought tickets for the Tokyo Olympics from brokers — known as Authorized Ticket Resellers — will not get full refunds. And they may have a long wait to get any refunds at all.

Ravi Shastri congratulates Indian team for ‘season of a lifetime’

Head coach Ravi Shastri was effusive in his praise for the Indian team for having what he termed "a season of a lifetime", during which it notched up five consecutive series victories against the word’s top two teams in the difficult COVID era.

03/29/2021 India Comments Off on Top news of the day: Mehbooba Mufti denied passport after CID report; 8 States account for over 84% of India’s fresh COVID-19 cases, and more
TV & Movies