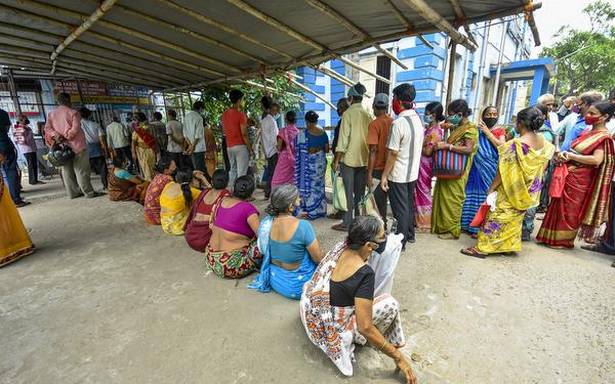 In the previous meeting on May 28, the Council, which has State Ministers as members, a Group of Ministers (GoM) was set up to recommend tax relief on COVID essentials, including PPE kits, masks and vaccines, to the GST council. The GoM submitted its report on June 7.

“No one is our enemy and we want the poor people of every community to progress but we need community support. Instead of criticising the government, organisations such as AIUDF (All India United Democratic Front) and AAMSU (All Assam Minority Students’ Union) should motivate people to have smaller families,” Himanta Biswa Sarma said.

COVID-19 toll in Bihar jumps by 72% after recount

On June 7, the official toll figure in the State was 5,424 but on June 8, the government said the figure had gone up to 9,375 after it recounted deaths in all 38 districts.

With Jitin Prasada following Jyotiraditya Scindia in joining the BJP, such question is being to be asked in the Congress, especially among the veterans.

The petition refers to how “massive publicity was given by the media that many of the positive cases of symptoms of coronavirus were found from Tablighi Jamaat at Nizamuddin in Delhi”.

Mr. Adityanath is visiting Delhi a day after Congress leader Jitin Prasada switched over to the BJP.

The Central Bureau of Investigation has booked Mr. Tuki and others for allegedly awarding contracts without following procedures. The beneficiaries included his relatives, the agency said.

Binoy Viswam has filed a breach of privilege motion against the Lakshadweep Administrator Praful K. Patel for denying him permission to visit the islands, preventing him from meeting his cadre and people of the island amidst growing resentment about the policies of the new administrator.

Pakistan to hold Legislative Assembly polls in PoK on July 25

In 2020, Pakistan conducted the Legislative Assembly election in Gilgit-Baltistan.

The accusations related to the misuse of land for the charitable Daw Khin Kyi Foundation, according to the anti-Corruption Commission.

Man who slapped French President Macron to go on trial

Damien Tarel was quickly arrested after the swipe on June 8 that caught Mr. Macron in the face with an audible thwack as the French leader was greeting a crowd in southeast France.

The test kit is priced at ₹250 and will be made available as a single-pack, with additional purchase options including a pack of 3, 5 and 25 tests.

The government has relaxed rules to potentially allow third-party apps to offer vaccine bookings and has taken back control of procurement from states following delays and shortages. It also faced initial problems with its own vaccine booking platform.

Carolyn Everson played a key role in scaling up the social network’s ad business, making it one of the largest advertising platforms. Advertising revenue accounted for more than 97% of Facebook’s total revenue in 2020.

England’s white-ball skipper Eoin Morgan and wicketkeeper batsman Jos Buttler are under investigation by the England and Wales Cricket Board (ECB) after their tweets, mocking Indians, surfaced on the social media on June 9.

06/10/2021 India Comments Off on Top news of the day: GST Council to meet on June 12 to discuss tax cut on COVID essentials; Assam CM urges minorities to adopt population control, and more
India