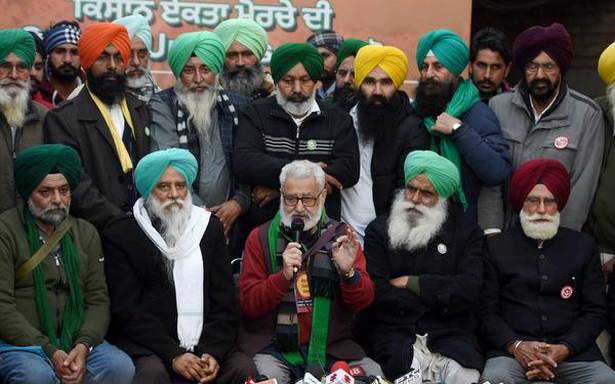 The court formed an expert committee to hear the apprehensions raised by farmers against the laws. The committee is composed of Bhupinder Singh Mann, agriculture economist Ashok Gulati, Dr. Pramod Kumar Joshi (former director, National Academy of Agricultural Research Management) and Anil Ghanwat from Shetkari Sangathan. The committee will report back to the court.

“The members of the Supreme Court-appointed committee are not dependable as they have been writing on how agri laws are pro-farmer. We will continue our agitation,” farmer leader Balbeer Singh Rajewal told a press conference at Singhu Border.

All the shots — 1.1 crore from the Serum Institute of India and 55 lakh from Bharat Biotech — will be received by January 14.

While India recorded 12,584 new cases of coronavirus in a day, the lowest in around seven months, a net decline of 5,968 cases has been registered during the same period, according to a Health Ministry update at 8 a.m. on January 12.

Will hold our ground along LAC: Gen. Naravane

The Army Chief asserted that the Army was ready to hold its ground as long as it took along the Line of Actual Control (LAC) in Eastern Ladakh to achieve the national objectives, and noted that a collusive threat from China and Pakistan existed and India must be ready for it.

While addressing the valedictory session of the second National Youth Parliament Festival via videoconferencing, he said: “Today, days of winning election by the crutches of a surname are over. Still this malaise of dynastic politics is far from over…Political dynasty promotes self and family instead of pushing nation first. This is a major cause of social corruption in India.”

Court does not want to be cause of fatalities due to coronavirus, says Chief Justice Bobde.

Mr. Aditya Alva had been on the run after he was named an accused in the high-profile drug case involving Kannada film actors and producers and party organisers.

The visit comes amid a resurgence of the deadly disease in several cities close to Beijing, prompting lockdowns. “Current plan is that they will fly from Singapore to Wuhan on January 14,” Chinese Foreign Ministry spokesman Zhao Lijian told a media briefing in Beijing.

The Pakistan government has issued at least seven special permits to Dubai Ruler Sheikh Mohammed bin Rashid Al-Maktoum and six other members of the ruling family to hunt the internationally protected bird houbara bustard during the 2020-21 hunting season, according to a media report.

How different is Signal from WhatsApp?

Tesla CEO Elon Musk’s tweet encouraging users to switch to Signal has given the privacy-focussed app an extra lift.

Retail inflation based on the Consumer Price Index (CPI) was 6.93% in November.

“There was no room service or house keeping facilities. The gym is very basic and not of international standards and the swimming pool can’t be accessed. This wasn’t what they were promised when they checked in,” a senior BCCI source said.