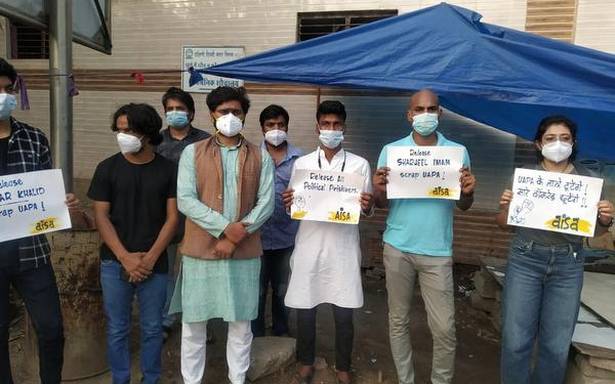 Delhi Police’s argument that it needed more time to verify the permanent addresses of the three rejected.

Students unsatisfied with the evaluation formula can take up Class 12 exam to be held when situation is conducive.

People need to be assured that vaccines are protective even against Delta variant: PHFI president

If a nasal or orally administered mucosal vaccine proves safe and efficacious, that will be a boon for child vaccination, says Dr. Srinath Reddy.

Covaxin moves a step closer to WHO nod

The meeting on the vaccine developed by Bharat Biotech is planned for June 23, a WHO document on the status of COVID-19 vaccines within EUL/PQ evaluation process and last updated on June 17 said.

Govt takes steps to enhance availability of Amphotericin B

The government has been so far able to allot over 6.67 lakh vials of Amphotericin B to States and Union Territories (UTs) by augmenting production and initiating imports.

Will give befitting reply to any external aggression, says Rajnath in Arunachal

The Defence Minister leaves out China while naming “five countries bordering the Northeast”.

The CBI in its supplementary charge sheet has invoked Section 201 of the IPC among other charges which pertain to the destruction of evidence by a suspect as part of criminal conspiracy.

The Ghaziabad Police had said it has already registered an FIR in connection with the attack on an elderly man.

Ministry of External Affairs spokesperson Arindam Bagchi said the bill has a provision for inviting the municipal court to decide whether any prejudice has been caused to Mr. Jadhav on account of the failure to provide consular access in accordance with a verdict of the International Court of Justice.

“All bio-weapons related subjects that the country has should be subject to scrutiny,” says Zeng Guang.

The head of Sri Lanka’s Marine Environment Protection Authority, Darshini Lahandapura, also confirmed that the ship had sunk. She said it was currently unsafe to remove the wreck because of rough monsoon seas.

The fresh appeal from Flipkart filed on June 16, argues that decision by the High Court to allow the probe to resume was erroneous and must be put on hold.

Mr. Nadella, who took over as CEO in 2014 from Steve Ballmer, has been instrumental in scaling up its business including billion-dollar acquisitions like LinkedIn, Nuance Communications and ZeniMax.

Many of the outages were reported by people in Australia trying to do banking, book flights and access postal services.

Rafael Nadal pulls out of Wimbledon and Tokyo Olympics

“It’s never an easy decision to take but after listening to my body and discussing it with my team I understand that it is the right decision,” he tweeted.