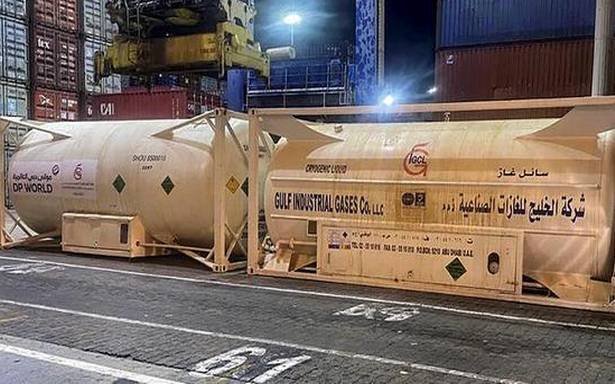 The Indian Premier League’s (IPL) 2021 edition has been indefinitely suspended, according to IPL chairman Brijesh Patel. “We have suspended the IPL for now. The new window will be worked out later on. A statement will follow soon,” Mr. Patel told The Hindu on May 4.

After IPL postponement, World T20 could be moved to UAE

This year’s World T20 World is set to be moved from India to the UAE with the BCCI acknowledging that none of the participating teams would be "comfortable" coming here because "a third wave" of COVID-19 cases is expected at the time of the event.

Around 40 lakh items, comprising medicines, oxygen cylinders and masks, received in foreign aid have been distributed to 86 institutions and hospitals, mostly run by the Central government in 31 States and Union Territories, according to a statement issued by the Union Health Ministry on Wednesday. Amid the second wave of COVID-19, with over 3 lakh cases being reported daily, India for the first time in 17 years decided to accept foreign aid.

Prime Minister Narendra Modi on Tuesday called up West Bengal Governor Jagdeep Dhankar after reports of post poll violence came from the State. Various political parties, including the BJP, the CPI(M) and the Congress have alleged that their cadre were being attacked by victorious Trinamool Congress persons.

All Central government departments will continue with staggered office hours and 50% attendance of Under Secretary and below level employees till this month-end as the COVID-19 situation has not improved to a desirable level, according to a Personnel Ministry order.

Coronavirus | Bihar imposes lockdown till May 15

Bihar Chief Minister Nitish Kumar on Tuesday announced a lockdown in the State till May 15, a day after the Patna High Court rapped the government for its failure to control the COVID-19 situation and stated “enforce a lockdown or the court will order it”.

An elevated section of the Mexico City metro collapsed and sent a subway car plunging toward a busy boulevard late on May 3, killing at least 23 people and injuring about 70, city officials said. Rescuers searched a car left dangling from the overpass for hours for anyone who might be trapped.

As Maharashtra shows signs of plateauing of COVID-19 cases, the civic administration in Mumbai has been directed to start preparations anticipating the third wave of coronavirus, with a special focus on paediatric wards.

News Analysis | A paradigm shift in Supreme Court after Justice N.V. Ramana takes over as CJI

A series of decisions within a week since Justice N.V. Ramana took over as the 48th Chief Justice of India shows a rejuvenation happening within the Supreme Court in its role as the guardian of rights of ordinary people.

The debate on the Congress’ debacle in the Assembly elections can wait as the country is faced with a national health emergency, a prominent member of the party’s group of 23 dissenters (G-23) said in an interview to The Hindu on Tuesday.

Star India, the official broadcaster of the Indian Premier League, on Tuesday supported the BCCI’s decision to indefinitely suspend the lucrative T20 event due to a COVID-19 outbreak in its bio-bubble. The suspension of the league was announced after Sunrisers Hyderabad’s wicketkeeper-batsman Wriddhiman Saha tested positive for COVID-19 along with Delhi Capitals’ veteran spinner Amit Mishra.

Foreign Ministers from the Group of Seven wealthy industrialised nations are gathering Tuesday in London — their first face-to-face meeting in more than two years — to grapple with threats to health, prosperity and democracy. Host country Britain has warned that the increasingly aggressive activities of Russia, China and Iran pose a challenge to democratic societies and the international rule of law.