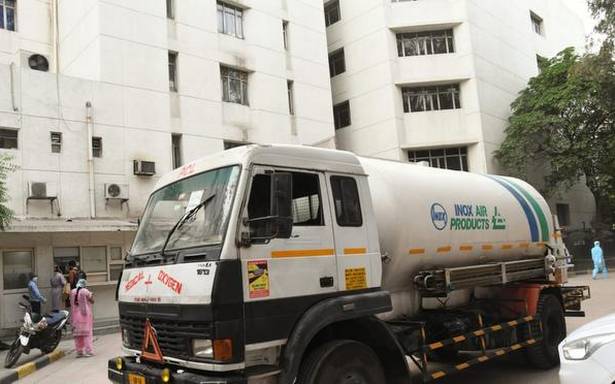 With the death of the 12 patients in the south Delhi hospital — which announced at 12.30 p.m. that it had run out of oxygen — the number of hospital patients who have lost their lives in the deepening crisis in the last eight days has gone up to 57.

The Delhi High Court has warned the Central government of initiating contempt proceedings against its officers for their failure to fullfill the 490 metric tonne of oxgen allocated for Delhi even for a single day. A bench of Justice Vipin Sanghi and Justice Rekha Palli said, “pertinently, the allocation to Delhi, which was earlier of 480 MT (since April 20, 2021), and now is of 490 MT has not been fulfilled even for a single day”.

The warning about the new variant in early March was issued by the Indian SARS-CoV-2 Genetics Consortium (INSACOG).

The submission by the Ministry of Home Affairs has come in response to a plea seeking to debar campaigners and candidates from campaigning in the Assembly elections for repeatedly violating the mandatory guidelines, including wearing of masks, issued by the Election Commission of India and the Centre in view of the COVID-19 pandemic.

Apollo Hospitals sources said the drive commenced at its centres in Hyderabad and Kolkata, but not in Delhi. Max Healthcare announced the drive will begin at “select hospitals in the network in the NCR of Delhi”. Fortis Healthcare, in a statement, had said people in the 18-44 age group will be administered Covaxin for ₹1,250 at its “centres across north India”.

The Centre has so far provided nearly 16.37 crore vaccine doses to States/UTs free of cost. Of this, the total consumption, including wastages, is 15,58,48,782 doses, according to official data available till 8 a.m. IST on May 1.

Coronavirus | Delhi CM announces extension of lockdown till May 10

This will be the second extension of the lockdown in the city to contain the COVID pandemic and, effectively, mean that restrictions part of the measure remain in force continuously for three weeks.

16 dead in fire at COVID-19 hospital in Gujarat

The deceased include 14 patients and two staff members who were attending to them.

Prison officials said gangster-turned-politician Shahabuddin, who was serving serving life imprisonment in Tihar, tested positive on April 20 and was admitted to Deen Dayal Upadhyay Hospital, where he died during treatment.

On a day of fast-paced developments, Health Minister Eatala Rajender has been stripped off his portfolio just 24 hours after a section of land assignees of Atchampet village in Masaipet Mandal of Medak district complained that their land had allegedly been encroached by Minister and his supporters for expansion of a poultry farm and hatchery belonging to the latter.

The decision was based on the proportion of overseas travellers in quarantine in Australia, who have contracted the infection in India, according to Health Minister Greg hunt.

Powerful quake hits off northern Japan, no threat of tsunami

Two people were injured in Miyagi and another in the neighbouring Prefecture of Fukushima, but none of the injuries were life-threatening.

Watch | Japan to release contaminated Fukushima water into the sea

On April 13, the Japanese govt announced the release of more than 1 million tonnes of contaminated water into the sea from the destroyed Fukushima​ nuclear station.

No children were found inside the home. The younger lot of residents were at least 20 years and above. In total, there were five women and the rest were men.

Continue to insist on release of detained leaders and end to violence: India at UNSC meeting on Myanmar

Myanmar’s military seized power on February 1 after overthrowing the elected government led by Aung San Suu Kyi and declared a state of emergency. Suu Kyi is among an estimated 3,400 people still being held by the junta.

The revenues for the month of April 2021 are 14% higher than ₹1.23 lakh crore collected in March.

Coronavirus | WHO lists Moderna vaccine for emergency use

The U.S. vaccine is the fifth jab to earn WHO’s emergency listing. Moderna on April 29 said it expected to produce up to three billion doses of its vaccine in 2022 through new funding commitments to boost supply at manufacturing sites in Europe and the U.S.

Under Warner, SRH have lost five of their six games as the Australian hasn’t been in the best of form in the ongoing edition.

05/01/2021 India Comments Off on Top news of the day: 12 patients die as Delhi’s Batra Hospital runs out of oxygen; Delhi High Court tells Centre to supply oxygen to Delhi or face contempt proceedings, and more
India