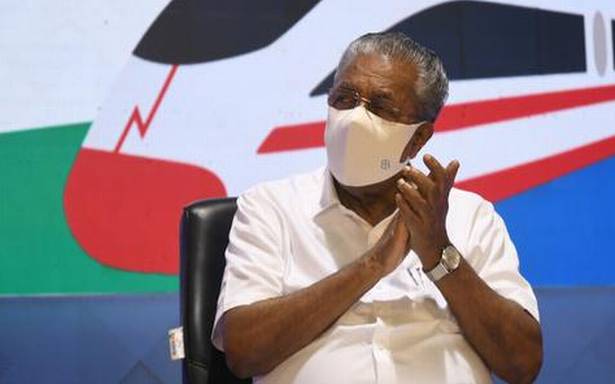 1. General Education Minister V. Sivankutty to announce the timetable for in-person classes for students from one to nine. The classes are scheduled to start on February 14. The government would also decide whether to allow schools to resume normal hours.

2. Chief Minister Pinarayi Vijayan to chair a meeting of the pandemic monitoring committee. He might take a call on withdrawing the Sunday lockdown, given the falling infection and mortality rates.

3. High Court to rule on Media One Channel’s plea against the Centre’s ban on using the airwaves on the charge of imperilling national security. The CPI(M) and Congress had slammed the order as another attempt by the Modi government to gag the independent media.

4. High Court to examine a bail plea filed by alleged confidence trickster and fake antiquities dealer Monson Mavunkal in a rape case registered against him by the Kochi police.

5. Enforcement Directorate in Kochi issues summons to UAE diplomatic baggage gold smuggling case accused Swapna Suresh. In a recent television interview, Swapna had alleged that Chief Minister Pinarayi Vijayan’s former Principal Secretary, M. Sivasankar, a co-accused in the case, was fully aware of the smuggling racket. She had also claimed that she had made a pre-scripted mobile phone recording stating that Chief Minister Pinarayi Vijayan was innocent of the crime. Swapna alleged that she had made the recording in jail at the instance of Mr. Sivasankar. The UDF and BJP had used the headline-grabbing interview to resurrect the gold case in an attempt to put the LDF government on the defence.

6. The Kochi police to record the statement of an actor hopeful who claimed that film director K. Balachandra Kumar had sexually exploited her by falsely promising a role in a cinema. Mr. Kumar was in the spotlight recently for alleging that he witnessed actor Dileep plotting the murder of officers who investigated him in connection with the actor abduction and rape case in Kochi in 2017.

7. Residents to protest against the alleged failure to prevent deaths from human-wildlife conflict in Athirapally in Thrissur district. A wild elephant had attacked a family returning from a relative’s funeral late Monday and stomped to death their five-year-old daughter.

8. Actor Dileep to give his voice sample for forensic examination at a sound editing studio in Kakkanad in Kochi at the instance of the Crime Branch. The test would examine whether the actor’s voice matches an audio recording allegedly pointing to a plot to murder officers who charge-sheeted the actor abduction and rape case in Kochi in 2017. Dileep is accused in the case currently under trial at a special court in Ernakulam. The prosecution case is that Dileep had tasked hirelings to abduct and rape the actor and record her ordeal on mobile telephone out of personal spite for allegedly upsetting his family life.

9. Disputes between the survivors of persons who died of COVID-19 have blocked the distribution of ex-gratia in around 1000 cases in the State. Kerala has recorded around 56,000 covid deaths. The authorities have received approximately 45,000 applications for covid death compensation.