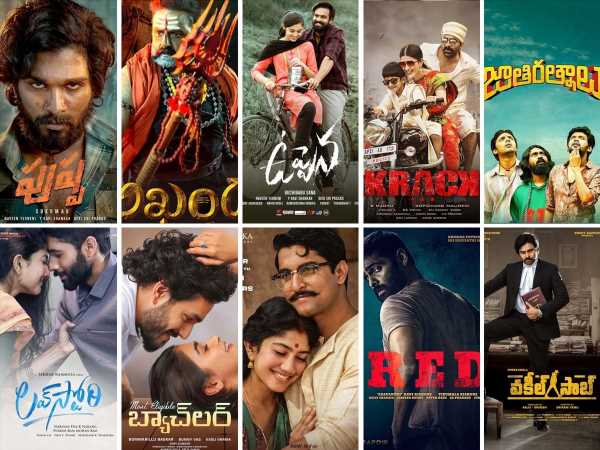 Theaters closed for almost 9 months in 2020 due to a corona lockdown. Finally opened in December last year.With the release of several movies as a gift of wallpapers in January, Tollywood has recovered again as they have given good results.Blockbusters also hit in February and March. No other film industry in India has recovered so quickly. Perhaps that’s why the theaters closed again in the end of April with the Second Wave effect.Re-opened at the end of July. Though not so fast in January, Tollywood picked up the slog after the second wave. It is good news that three big movies will be released in December.

Meanwhile, some of the films released this year include record-breaking films in terms of collections.Most importantly there are some movies that got the highest collections that no one expected on the first day of this pandemic. Finally let’s take a look at their results:

1.PUSHPA
The third Allu Arjun-Sukumar combination film released on December 17.Released as a Pan India movie in Telugu as well as Tamil, Hindi, Kannada and Malayalam, the film has set a worldwide record by grossing Rs 120.35 crore so far this year. But it remains to be seen how far it will go in the full run.

2.AKHANDA
Coming in a hat-trick combination of Balayya and Boyapati, the film became a worldwide super hit with a share of Rs 68.97 crore worldwide for 25 days.

3.UPPENA
Starring Vaishnav Tej and Kriti Shetty, the film became a double blockbuster with a worldwide gross of Rs 51.52 crore in its full run. Until then, Mirchi was the highest grossing film of the month. The ‘uppena’ broke that record.

4.KRACK
The film, which is a hat trick combination of Ravi Teja and Gopichand Malineni, grossed Rs 39.16 crore worldwide in the full run and became the biggest hit movie of Ravi Teja’s career.

5.JATHIRATNALU
Directed by Anudeep and starring Naveen Polisetti as the hero, the film grossed Rs 38.52 crore in full run and became a triple blockbuster.

8. SHYAM SINGHA ROY
Directed by Rahul Sankrityan as Nani Hero, the film grossed over Rs 19 crore in 4 days.At full run, the film is likely to garner a share of over Rs 25 crore and reach the hit list.

9.RED
The film, directed by Kishore Thirumala as Ram Hero, was released as a wallpaper gift and grossed Rs 19.79 crore, making it a commercial hit.