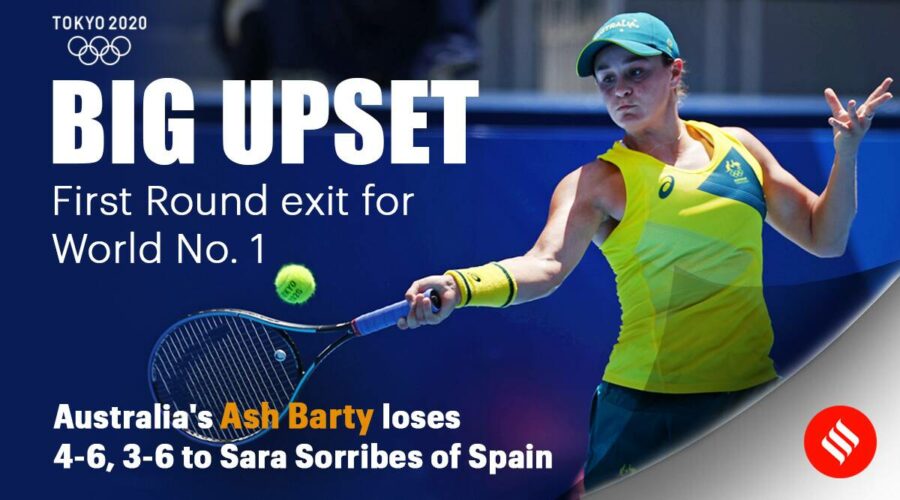 Sania and Raina were down 1-8 in the Super Tie break but reeled off seven straight points to make it 8-8 but lost the next two points to make an exit from the Games. Top-ranked Ash Barty has been upset by 48th-ranked Spanish opponent Sara Sorribes Tormo 6-4, 6-3 in the first round of the Tokyo tennis tournament.

It was Barty’s Olympic singles debut. She won a doubles match with Australian teammate Storm Sanders on Saturday. 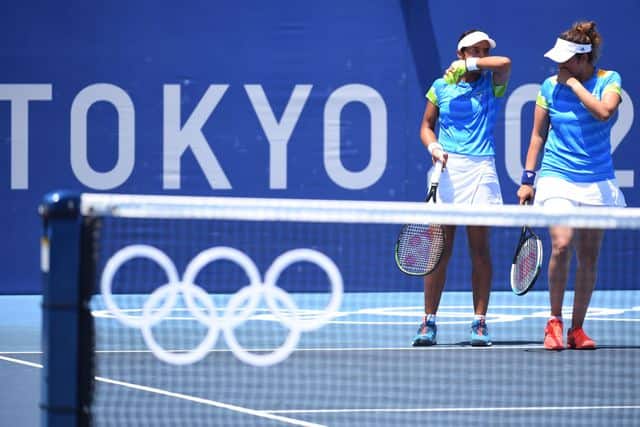 Sania Mirza and debutant Ankita Raina were knocked out of the Tokyo Olympics despite dominating a large part of their women’s doubles opener against Ukrainian twin sisters Nadiia and Liudmyla Kichenok, here on Sunday.

Sania and Raina were running away with the contest after bageling their opponents but in a dramatic turnround, the Kichenok sisters came back from the dead to pull off a 0-6 7-6(0) 10-8 win at court 11 of Ariake Tennis Centre.

Sania was serving for the match at 5-3 in the second set but perhaps nerves got the better of her and ended up dropping her serve.

From there on, it was not the same match, in which the Ukrainians looked out of sort, struggling with their serves and returns.

The Indians became the prey and Ukrainians pounced on them.

Sania and Raina were down 1-8 in the Super Tie break but reeled off seven straight points to make it 8-8 but lost the next two points to make an exit from the Games.

The Indians broke the Ukrainians in the second game of the match to open up a lead. What followed was a sequence of holds for the Indians but drops for their rivals. In just 21 minutes, Mirza and Raina had claimed the first set.

The Kichenok sisters finally got on board when Raina’s backhand return sailed over the baseline in the second game of the second set.

Raina went up 40-15 in the third game but buried a forehand return on the net and Mirza also fumbled at the net to get to deuce point. The young Indian held nerves to serve out the game with consecutive points.

Nadiia’s two double faults put the Ukrainians in trouble but they came out unscathed with some solid net-play, making it 2-2.

Sania hit a crushing forehand winner to earn a break chance in the sixth game but Raina’s backhand return was dispatched for a drop volley winner. Another chance came India’s way but Raina netted her backhand from the baseline.

Sania’s backhand service return winner earned the Indians another chance and they did not squander it this time to go up 4-2. Raina had an easy hold in the next and now they were one game away from the second round.


Serving for match, Sania went 15-30 but pulled off a well calculated lob to ward off the danger. However, she made two consecutive errors to hand the Ukrainians their first break, the second being a long backhand.

From there on, the match changed dramatically and the Ukrainians started calling the shots. – PTI

Murray out of Olympic singles tournament with quad strain Two-time defending champion Andy Murray withdrew from the singles tournament at the Tokyo Olympics on Sunday because of a right quad strain.

The British player made the decision shortly ahead of his scheduled opener against ninth-seeded Felix Auger-Aliassime of Canada on Center Court.

Murray remained in the doubles tournament with partner Joe Salisbury. Murray and Salisbury beat the second-seeded French team of Pierre-Hughes Herbert and Nicolas Mahut 6-3, 6-2 on Saturday.

“I am really disappointed at having to withdraw but the medical staff have advised me against playing in both events, so I have made the difficult decision to withdraw from the singles and focus on playing doubles with Joe,” Murray said.

It’s the latest setback for the 34-year-old Murray after only recently returning to the tour from a three-month absence because of a groin problem. He has also had serious issues with a bad hip that wound up requiring two operations.-AP

The International Tennis Federation is giving Olympics players extra time during breaks in play after facing criticism for staging matches during the highest heat of the day.

The federation says change of ends and set breaks have been extended by an extra 30 seconds and will now be one minute, 30 seconds.

Second-seeded Daniil Medvedev had asked for longer breaks to bring the Olympics into line with regular tour events.
The federation says it will consider suspending play if temperatures keep rising.

Top-seeded Novak Djokovic and Medvedev both questioned why matches Saturday were not moved into an evening session. -AP