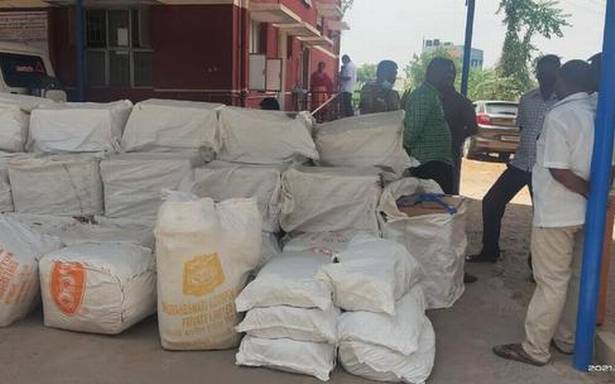 Acting on a tip-off, a team of Special Branch sleuths attached to the Superintendent of Police office here intercepted a container truck at Vittal Naicken Patti near Vedasandur on Friday and seized 1,000 kg of banned tobacco products which was valued at ₹15 lakh in the black market.

Three persons, including the lorry driver, were detained for interrogation. Preliminary inquiries revealed that the contraband, transported from Salem, was meant for Sikkandar Haliq and Rafeeq of Begumpur in Dindigul. The lorry had a consignment of furniture items from Bengaluru and was proceeding to Kottayam in Kerala. The duo had instructed the lorry driver to follow their car.

As the Special Branch police were on surveillance along the Dindigul bypass road, the duo suspected trouble and asked the lorry driver to park the vehicle at Vittal Naicken Patti itself. However, the police intercepted the duo and seized their mobile phones.

Call logs showed that they had been continuously communicating with the lorry driver. After finding his location, the police seized the banned tobacco goods from the lorry.

Superintendent of Police V.R. Srinivasan visited the spot and commended the swift operation of Sub-Inspectors Marimuthu and Sheik Dawood.

Vedasandur police have registered a case and are investigating.